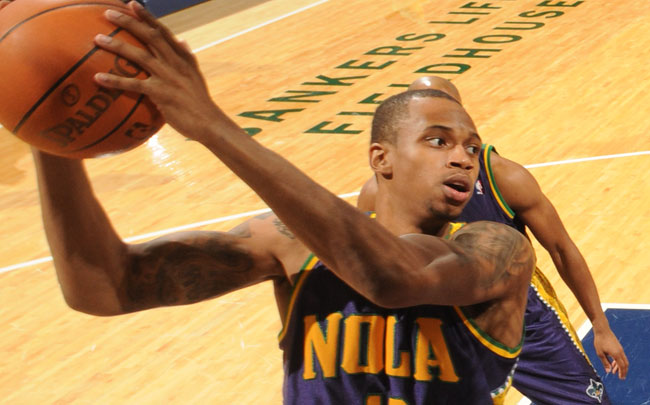 Yahoo: Lance Thomas may have Duke’s basketball program in a little bit of hot water.  According to a lawsuit filed by celebrity jeweler Rafaello & Co., Thomas purchased five items for $97,800 in December of 2009.  He paid just $30,000 down, and he’s allegedly yet to pay the remaining balance (he was supposed to have done so within 15 days).  This is of concern to Duke, obviously, because Thomas was still in college at the time of the purchase.  I’m sure the NCAA will find it more than a little bit fishy that Thomas had $30,000 to spend on jewelry, but the bigger issue is the $67,800 he received in credit.  How was Thomas, who wasn’t set to become an NBA player until June, planning to pay up in just 15 days?

Youtube: Observe this nasty poster by Serbia’s Nemanja Nedović, the man that some call “The European Derrick Rose.”  Unfortunately for Serbia, their own Derrick Rose wasn’t able to lead them past Estonia in this qualifying match for Eurobasket 2013 (special thanks to my friend jamal99 of the InsideHoops forums for the video/information).

Footbasket/Pro Basketball Talk: Marcus Camby couldn’t even bear the thought of wearing a Miami Heat uniform, so Chris Bosh is bulking up to play center.  If I were a Heat fan, I’d be wary of this experiment.  Added muscle/weight doesn’t always translate to a higher level of play.  Ask the Knicks about Amare Stoudemire.

SLAM: Much of the NBA had its eyes on the NFL yesterday.  Personally, I enjoyed Bradley Beal’s assessment of Peyton Manning’s IQ: It’s “dumb high!”

Sun Sentinel: In order to improve his jump shot, Dwyane Wade is working on how he catches the ball.  According to Dwyane Wade, Dwyane Wade has actually got “one of the best mid-range shots in the game,” but “other reasons” cause him to “come up short a lot.”  Basketball reasons?

Twitter: It’s JR Smith’s birthday (27) today.  Follow him here and wait for the ensuing chaos.  In the comments section, leave your wager on the total cost, including any and all fines levied by David Stern.

NBA Store: The online store of the Phoenix Suns is not carrying the jersey of any current player (via TBJ’s @TasMelas).  Nostalgic Suns fans will be pleased to learn that authentic Robin Lopez jerseys can still be had for just $259.99, though (and for your lady friend, a women’s replica)!

Hangtime Blog/ESPN/Bullets Forever: ESPN recently ranked the Oklahoma City Thunder the premier franchise in all of sports.  Keep in mind that this is not a list of the most valuable franchises; the criteria includes price of admission, fan relations, and ownership’s honesty in the community (is Seattle not a community?).  Oh, and then there’s the Kings, who edged the Bobcats for worst franchise in the NBA, finishing 121st out of 122.  Also, in the ownership category, the Wizards and Capitals finished 90th and 13th respectively.  That’s kind of odd considering that both teams are owned by the same guy.

Eye On Basketball: In a ranking of the top 100 NBA players, how many spots do you figure would separate JJ Redick and Kevin Martin?  Did anybody guess one?

NBA247365.COM: Still trying to move these t-shirts.  Make them a success and I’ll print more designs!