Celtics Take Game Five: The Good, The Bad, And The Lucky 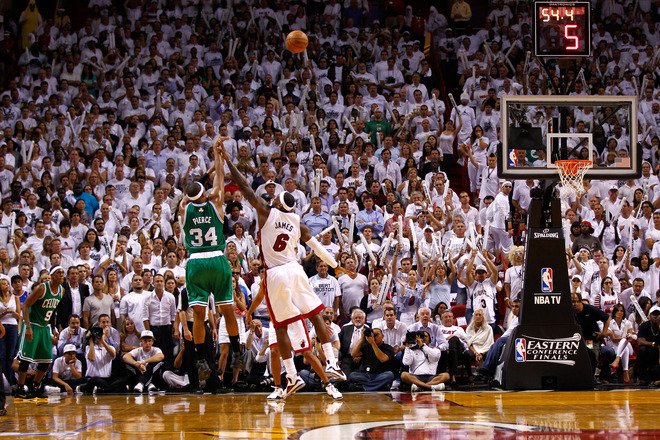 Don’t ask me how they’ve done it, but they’ve done it.  With a four-point victory in what was expected to be Miami’s home-court triumph, the Boston Celtics, who were supposed to be fishing, trading, or retiring right about now, moved to within one game of the NBA Finals.  At this point, it all makes very little sense to me.  I sat in front of the TV with my jaw agape throughout last night’s second half, almost as if I was watching the moon landing, or some other unprecedented feat.  The thing is, what Boston did last night was hardly unprecedented.  They won a playoff game… something they’d done 53 times since 2008.  Am I a fool for doubting they could do it a 54th, or is this turn of events truly as surprising as I feel that it is?  Like I said, I don’t know.  Since I don’t know, I’ll provide you with the pieces—the good, the bad, and the lucky building blocks with which Boston built what may become an epic victory.  I’ll allow you, the reader, to put them together.

The Finish. Dwyane Wade’s triple-adjustment layup was sick, and Mario Chalmers probably hit the coldest shot he’s made since the NCAA title game, but holy mother of Paul Pierce, what a f@cking three-point shot by The Truth!  This is hardly a surefire scenario, but let’s say Boston continues to do the unthinkable, going on to finish the Heat before winning a second NBA title with their big three.  That shot by Pierce will become one you’ll see time and time again, and that’s extra intriguing due to the fact that it came in the face of LeBron James.  Taking it a step further, I can even see P2′s shot becoming something of a symbol of LeBron’s shortcomings, both personal and Miami-Heat-related, if things never pan out in South Beach.  Paul Pierce and the Celtics have been a monkey on his back since the early days of Cleveland, and they could become a rabid gorilla with one more victory.  Pierce’s latest jumper would serve as a microcosm of the evolution.

Kevin Garnett. As he worked his way to 26 points and 11 rebounds, the Big Ticket proved to be the most consistent performer on the floor—and that consistency lasted well into crunch time, Wally Szczerbiak.  Beginning with a critical block on a LeBron James layup attempt at the 3:18 mark of the fourth, KG made three huge plays.  Following what was arguably the game’s single most important defensive contribution, Garnett knocked down one of his money shots (a mid-range jumper from the right baseline) before going on to confidently stick a pair of free throws (the game’s final points) that sealed the deal.  Verbally, he continued to sh!t on his detractors in a postgame interview, proving that it really is better to let a sleeping dog lie.  Not that Garnett is ever really a sleeping dog, but you get my point.

LeBron James. I don’t think he was aggressive enough.  He had his moments as he recorded a game-high 30 points and 13 rebounds, but too many of his 25 shots came from the outside, and he passed up opportunities to seek out his own aggressive brand of offense in the latter stages of the second half.  While it would be pretty absurd to say he straight up choked (like I said, game-high 30 points), I think it’s fair to say he could’ve done more.  He needs to be hungrier (like, a man possessed, basically) in order to carry Miami to a victory in this series… he’s really the only chance they’ve got.  I think he can do it, but I’m not sure that he will.  I thought (and still think) he could’ve done it in ’09… but, for whatever reason, doin’ it isn’t always the LeBron James way.

Rajon Rondo. Rondo’s struggles are expressed by his 7 points, 5 turnovers, and poor shooting percentage, but it wasn’t the box score stuff that really bothered me.  I thought Rajon was actually alright on offense, he just missed a few shots, some of them being very makeable ones.  That sh!t happens sometimes, but he also had a few mental lapses that could’ve been costly.   First, there was the unforced backcourt violation.  Later, he completely failed to box out on a key rebounding opportunity and fell asleep while dribbling the ball in transition, allowing Norris Cole to sneak up from behind and steal it.  He also played pretty horrible defense on LeBron James on one of the game’s final possessions.  Considering the series as a whole, Rondo has been nothing short of spectacular, obviously, but this was not his finest performance.

Erik Spoelstra. If Chris Bosh is going to play, play him.  The Heat ended up shooting 39% with Udonis Haslem in the mix for better than 33 minutes.  Haslem managed just three points on 1-5 while Bosh produced nine in less than half the time (14 minutes).  Fair to say Miami could’ve used another All-Star scoring option, rust or no rust?  Personally, I thought Bosh looked pretty good during his first stint.

Dwyane Wade. In the fourth quarter, Wade was excellent at the offensive end of the floor.  Hell, he scored nearly half (14) of Miami’s 30 points.  However, he had scored just 8 on 14 shot attempts through the first 36 minutes.  That’s just not enough.  I understand that he’s been facing not only a tough defense, but a lot of double teams.  Still, the Heat simply need him to be more consistent in his scoring.  They don’t have enough firepower to work through his droughts.

Mickael Pietrus. To get six points in as many fourth-quarter minutes from a defensive-minded role player… that’s huge.  To get all six of them off of two broken plays?  That’s absolutely back breaking.  With the Leprechauns looking to cut a six-point lead to four, it appeared that Brandon Bass was prepared to bring the basket down with the force of a thousand swinging sledgehammers.  Somehow, Dwyane Wade was able to make one of the finest rejections of his heralded shot-blocking career, sending Bass’s ball out to the top of the key.  Unfortunately for the Heat, Rajon Rondo was standing right where the loose ball happened to drop.  He made a brilliant play to direct it over to a wide-open Pietrus, and that was three-pointer number one.  Three-pointer number two came about four minutes later, and it came in similar fashion.  Down one with 2:15 to go, it appeared that Boston would lose the ball after Ray Allen fumbled it on his way to the lane.  However, after a brief scrum, Allen came up with the rock and tossed it out of the crowd.  Paul Pierce retrieved it and found Mickael Pietrus in that same right corner, and Boston took a two-point lead.  Talk about a pair of tough breaks for Miami… I mean, they’d earned a defensive stop on each of these possessions, yet Boston came away with a pair of three-point field goals in a game decided by four f@cking points.  I’m not taking anything away from the Celtics, who hustled their asses off, but they had the basketball gods looking out for them during these two sequences.