Jordan Crawford Stores His Shoes In The Refrigerator

As a former sneakerhead deterred only by added expenses and insufficient funds, I tend to pay at least a little attention to footwear as I tune in to NBA games.  This particular season I often noticed the feet of Jordan Crawford, and how many different Air Jordan models he adorned them with.  From the cardinal VIIs to the red suede Vs, Crawford’s collection stood out as one of the few impressive aspects of Wizards basketball throughout this lockout-shortened campaign.

Even more interesting than the collection itself, though, is the peculiar location in which the young shooting guard apparently stores it.  You see, it seems that Crawford keeps his kicks where he keeps his orange juice… and he doesn’t keep his orange juice in the closet.  Take a look at the following photo courtesy of his own Twitter account… 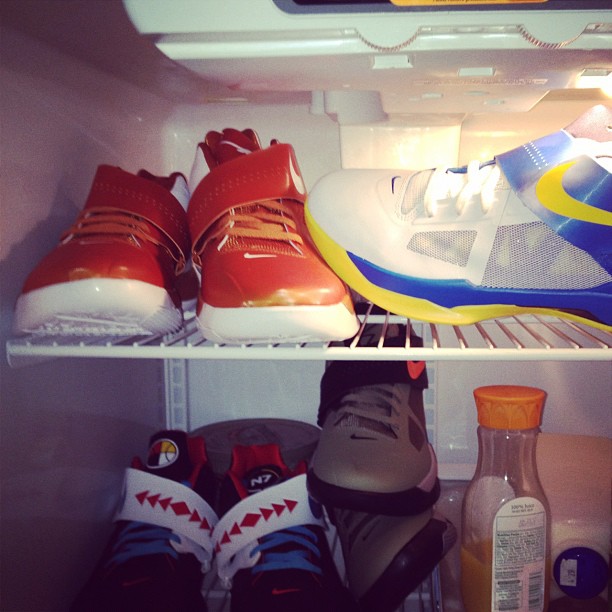 For entertainment’s sake, let’s assume that this refrigerator is actually where Jordan Crawford stores his collection of Kevin Durant sneakers.  He didn’t just put them there for a photo, but it’s where they actually live on a permanent basis.  Sooo… um… why?  Could he be attempting to cure his athlete’s foot?  Did JaVale McGee tell him sneakers are perishable?  Is he hiding them from his pal John Wall because he only pretends to like Reebok ZigTechs?

While this may not be as interesting as DeShawn Stevenson’s kitchen ATM, I’d say it’s far and away more confusing.  I mean, just when you think you’ve seen it all this dude reveals four pairs of shoes in his refrigerator.  Leave it to a Washington Wizard.