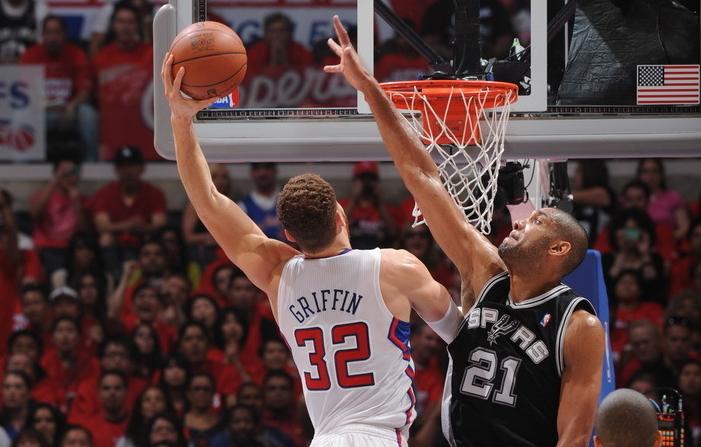 Good afternoon, slam dunk enthusiasts!  I was unable to get around to the Poster of the Day on Saturday, so today I will give to you a double dose of in-your-face action!  Think you can handle that?  If so, proceed.

Although Hill’s two-handed denial may have been even nastier than Durant’s revenge slam, I always consider the man who got the last laugh to be the winner.  Either way, you gotta love it when two athletes find themselves meeting above the rim twice in one game.  Twice in one minute, though?  Not often will you see that.

Secondly, Blake Griffin on Tim Duncan.  This dunk was a little out of the ordinary considering the man who threw it down.  Griffin tends to go with his right hand, and he typically destroys the defender with full-body contact.  On this play, though, Griffin elected to shift the ball to his left side and finish with his off hand in order to fly past Duncan.

Impressive versatility.  However, unlike Kevin Durant, Blake Griffin did not get the last laugh in his duel with Tim Duncan.  I’m not referring to San Antonio’s 24-point comeback, either.  Duncan may be old and grounded, but he’s still one hell of a defender.

One Response to POTD TWO PACK: Durant on Hill & Griffin on Duncan