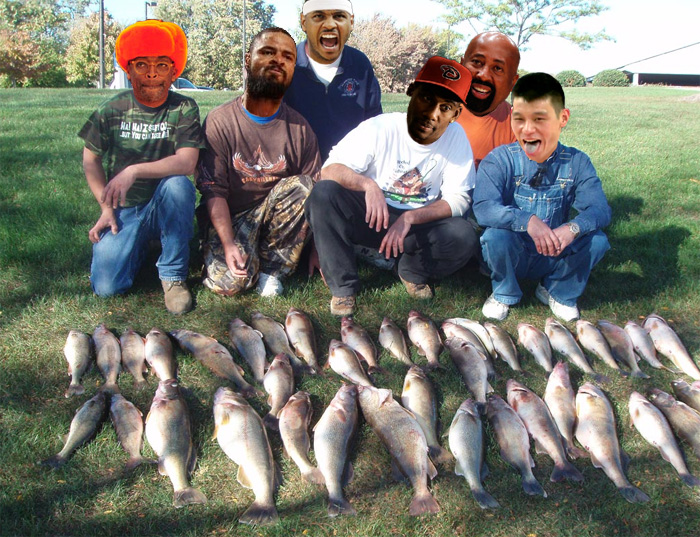 Heat 106, Knicks 94: It’s not easy to beat the Heat in Miami.  It’s even more difficult to beat the Heat when their bench provides five threes, and it’s damn near impossible to beat the Heat when they make 29 free throws.  All of these scenarios were in effect last night, and about the only reason the Knicks didn’t lose by 20+ was Carmelo.  Anthony decided he’d go down firing, tossing up 31 shots in the 12-point loss, and he actually made a respectable number of them (15) considering the average degree of difficulty.  Although LeBron and the Heat forced a lot of tough shots, the Knicks were able to connect at a higher clip (.474-.436).  It was Miami’s edges in three-point shooting (9-4) and free throws made (29-18) that built the gap.  Dwyane Wade and LeBron James made effortless entries into the paint all night long, resulting in 22 combined FT attempts and a few plays like this.

So… where do the Knicks go from here?  They’ve got a [dysfunctional] core of Carmelo Anthony, Amare Stoudemire, and Tyson Chandler locked in for the next three years.  Jeremy Lin is a free agent, and although I presume he’ll be brought back, is he really the answer at point guard?  JR Smith has a player option of just $2.5 million, so he may be a goner.

Once again, the Knicks have brought together a bunch of pieces that just don’t interconnect.  The pieces, individually, are better this time… but I don’t feel that there’s any coach and/or point guard–not even a combination of Phil Jackson and Steve Nash–that can make this group a cohesive unit capable of competing with the likes of Miami and Chicago (assuming Derrick Rose returns to his pre-injury form).

Hate to say it, New York, but it looks like it’s time to start over… again.  Unfortunately, Amare Stoudemire’s contract/injury history/poor season will make him extremely difficult to move.  Because of this little (read: big) problem I expect that the organization will continue to tread water.  They’ll bring in a big-name coach, a role player or two, maybe Steve Nash, and the media will talk them up as a title contender.  Don’t believe the impending hype, folks.  I’ve already begun photoshopping the ’13 fishing trip.

Grizzlies 92, Clippers 80: Had the Clippers been able to generate a shot that wasn’t a mid-range jumper they just may have brought their first-round series to a surprising end in Memphis.  Instead, they head back to Los Angeles with a banged up Blake Griffin and, even more importantly, a banged up Chris Paul.  Paul appeared to re-aggravate his groin injury as he went for a rebound in the fourth quarter, rendering him a non-factor from that point on.  As for Griffin, he had a funny landing on his left knee.  With only one day off before game six… there’s a very legitimate cause for concern here.  I think it’s clear that the Clippers are only going as far as Chris Paul is taking them, and he’s still going to have to make it happen one more time to lead them out of the first round.  He’ll need Blake Griffin to be able to get off the floor in order to do so.

As for last night’s game, I thought the turning point had come when Mike Conley picked up his fourth foul with seven minutes to go in the third.  The Clippers didn’t really begin to put a run together until five minutes (and four technical fouls) later, but a steal by Chris Paul would eventually serve as the spark.  The Clippers trailed by 19 at that point and had trailed by as many as 24, but they were able to fight to within 12 by the end of the third thanks to 10 points from Paul.  Paul was able to generate the burst of offense by forcing turnovers.  Twice he stripped the ball from OJ Mayo, who had taken over the point guard duties when Conley took a seat.  Never again were the Grizzlies able to get into any semblance of the inside-out offense they’d abused the Clippers with throughout the first half.  As a matter of fact, neither Zach Randolph nor Marc Gasol, who combined for 42 points, made a field goal in the second half (because they hardly touched the ball, not because they shot poorly).

Not only did the Grizzlies struggled to execute, but they found themselves unable to simply hang on to the f@cking ball.  As Mo Williams stuck a few difficult jump shots, Memphis coughed it up 5 times in the first 6:30 of the fourth.  The closest the Clippers were able to get was six, though, because they were equally inept at the offensive end (fourth quarter finished 15-15).  With Chris Paul hobbled and unable to penetrate the Clippers were completely unable to manufacture enough makeable shots to dig their way out of their latest hole.

Andre Miller and JaVale McGee probably have just one (maybe two, at best) more game(s) together, and that’s a damn shame.  Both Miller and McGee, who collectively make up the league’s newest high-wire act, will be free agents in a matter of months.  Miller has little interest in returning to Denver as a bench contributor, but McGee has enjoyed his change of senery and I expect that there’s mutual interest in a long-term contract.  So, assuming the Lakers show up to play some basketball, the incredible alley-oop tandem will put on their final performance later today.  Enjoy it, basketball fans.

Brilliant idea of the day: Remember when you were a little kid on the playground, how you’d dub yourself and your best friend “a package” so that you couldn’t be drafted to separate teams for the game of touch football?  Yeah, well I think Andre Miller and JaVale McGee should officially be made “a package.”  Wherever one goes, that’s where the other should have to go.