The Starting Lineup: Suns Beat Clippers, Remain In The Hunt 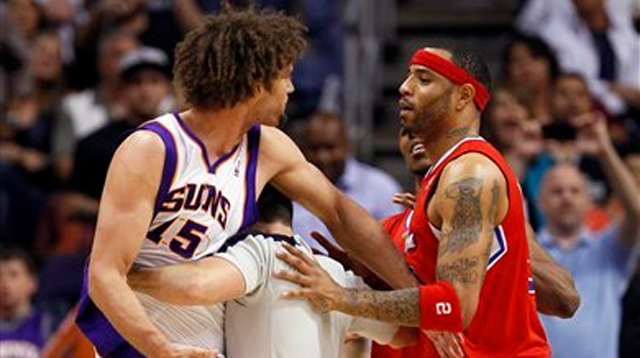 The Suns did themselves a big favor by snapping the Clippers’ five-game win streak (93-90), and they did it by playing an uncharacteristically-physical style of basketball. After allowing Los Angeles to score 29 points in the opening quarter, Phoenix held them to 61 over the next three, including 16 in the second and 19 in the fourth. Blake Griffin had been dominant in the early going, scoring 14 points in the first 11 minutes. However, from the second quarter on he took just three shots and four free throws. Now, if you’re Blake Griffin you simply can’t allow yourself to be taken out of the game like that. Give the Suns credit, though… they’re a team that gives up 42.8 points in the paint (23rd), and they got physical (I’m not endorsing Robin Lopez’s flagrant foul; they’d gotten tough with Griffin before that). As for the officiating, I thought it was pretty questionable, but not necessarily in favor of either team (at least not down the stretch). The most glaring mistake was the call on Randy Foye that resulted in an 89-88 Clipper deficit with under a minute to go, but it was followed by a pretty lame bumping call on Sebastian Telfair, who was basically run into by Chris Paul. The pair of subsequent free throws gave the Clipps the lead back, and Steve Nash had to go knock down a pair after a legitimate foul by Kenyon Martin to put the Suns back in charge. Things simply didn’t go the Clippers’ way from that point on. They got three shots to win/tie the game–a driving floater by Paul (blocked by Telfair), a wide-open three from Mo Williams (rimmed out), and a last-second Blake Griffin three (also rimmed out)–and none of them dropped. Tough breaks, but that’s why Blake Griffin can’t allow himself to be taken out of the game in a match up with frontcourtsmen like Channing Frye and Markieff Morris. No disrespect to either of those guys, but they shouldn’t be able to guard Blake Griffin. If Griffin was more of a factor the Suns probably wouldn’t have been able to hang around.

With the win Phoenix has moved into a tie with Utah for the 8th spot. Although the Suns have the tiebreaker and a nice swing of momentum, you still have to give the edge to the Jazz. The head-to-head match up is Tuesday in Salt Lake City, and Phoenix has to see Denver and San Antonio while Utah will play Orlando and Portland.

The Houston Rockets have picked an awfully inconvenient time to lose six games in a row. The downward skid can’t be blamed on any single player, obviously, but Courtney Lee bricked a free throw that’s probably going to join that missed layup in the back of his mind for the rest of his life. Lee had a chance to win Thursday night’s game against the Hornets, which went to overtime, in regulation with a pair of freebies. Down one with 15 seconds to go, Lee came up with a huge steal from Grievis Vasquez, who didn’t see him lying in the weeds. Marco Belinelli then made the dumbest play of his career, intentionally fouling Lee even though the Hornets were up a point. And then, with Lee’s second attempt (and a disastrous overtime), there went Houston’s season. Well, they were pretty much toast already, but this one puts them a game out with no tiebreakers. Eric Gordon, Carl Landry, and Gustavo Ayon got the job done for New Orleans, scoring all 18 of their fourth-quarter points along with 12 of the 18 they dropped in OT (that’s correct, the Hornets put up 18 in overtime). Carl Landry was a beast uncaged in the latter stages of this game. Three different times he ripped down an offensive rebound and went back up with it for a powerful score, flexing his muscles (both literally and figuratively) throughout the stretch run. He finished with 20 points on 9-13 to go along with 10 boards. Ayon scored all 9 of his points in the fourth quarter (6 in a row at one point) and hit the final shot of regulation, an ice-cold mid-range jumper that gave the Hornets a one-point lead. Gordon was huge all game long with 27 points, 4 rebounds, 5 assists, 3 steals, and a blocked shot. He nearly won the game at the end of regulation as he shook Courtney Lee with a beautiful behind-the-back move, but his jumper was just a bit off the mark.

Congratulations to the Timberwolves! By beating the Pistons 91-80 they ended an 11-game losing streak and won a game in the month of April for the first time in over three years. Credit JJ Barea, Nikola Pekovic, and Anthony Randolph for setting a certain tone early. Barea really looked for his big men in the paint (12 assists), and they delivered. Pekovic dominated the restricted area as he scored 23 points on 10-17, and Anthony Randolph was solid himself with 15 on 5-10. The two of ‘em also accounted for 19 rebounds and 12 free-throw attempts–more than Detroit took in the entire game (9). Will Bynum exploded for 17 points in the fourth quarter, but Nikola Pekovic was right there to score two buckets in a row when the Pistons began to close in on the lead. Minnesota made all their free throws down the stretch, assuring a victory.

I didn’t see the Miami/Chicago game because I elected to watch New Orleans/Houston instead. I suppose I could’ve gone back and watched it on Youtube, but do you really need my thoughts on a game where one team shot 36% from the floor? I’m certainly not an advocate box-score analysis, but I think it’s safe to say Chicago lost by 11 because they couldn’t put the ball in the hoop. The presence of Derrick Rose probably would’ve helped their cause, as Craig Sager suggested…

In another game I didn’t watch, the Pacers secured home court for the first round by beating the Bucks 118-109. Here’s a little more of that box-score analysis: the Bucks allowed 54 paint points and two 30-point quarters. Not exactly a recipe for success. Three different Pacers scored 20+, including Danny Granger (29), George Hill (22), and David West (21). Brandon Jennings and Monta Ellis missed 24 shots and turned the ball over 7 times. Larry Sanders lost his mind.

Assorted news: Dwight Howard will miss the playoffs and the Olympics to have surgery on his back. It’s unfortunate, obviously, but Orlando was toast anyway. The Celtics have waived Jermaine O’Neal and plan to sign Sean Williams.  The Grizzlies have added Lester Hudson, who couldn’t get anything better than a ten-day from Cleveland. Both players are eligible for the postseason. The NBPA wants Derek Fisher to resign from his position as president, which is funny to me ’cause I can’t f@cking stand Derek Fisher. Delonte West has been fined 25 grand for doing whatever it was that he did to Gordon Hayward. That may not seem like a big deal for an NBA player, but Delonte only makes the vet’s minimum. He plans to go without cable for a while.

2 Responses to The Starting Lineup: Suns Beat Clippers, Remain In The Hunt