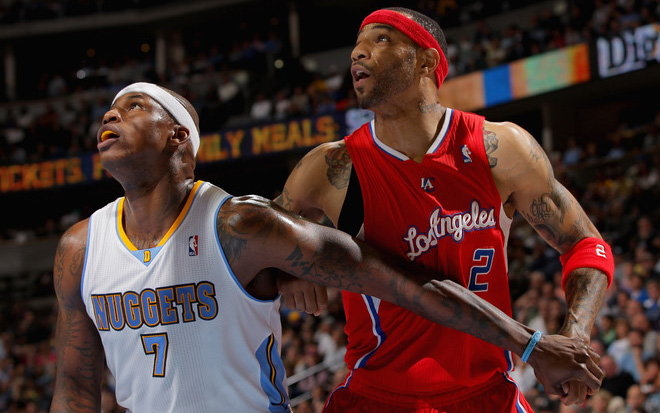 Another Bucks game, another blown opportunity. Milwaukee essentially sealed their lottery fate by giving up 121 points to the Wizards, who had scored a total of 241 in their last three games combined. As usual, offense wasn’t the problem for Milwaukee. They scored 112 themselves, including a 31-point fourth quarter. It doesn’t matter how many you score when the opposition is allowed to answer every trip down the floor, though. The final six minutes of this game were essentially a shootout with each team matching the other bucket for bucket (a score was made on 20 of the game’s final 27 trips). Washington had entered the fourth with a seven-point cushion and the Bucks were never able to get closer than three. The game really came down to a sequence of buckets from Monta Ellis, Brandon Jennings, and Jordan Crawford. Down six with only enough time (1:40) for one final push, Monta knocked down a mid-range jumper. Crawford came back with a 13-footer of his own. Brandon Jennings then appeared to have changed the game by bringing the Bucks to within three with just over a minute to go, but Crawford answered again with a shot-clock-beating three from about two feet behind the line. That final dagger was a swing of sh!t luck for the Bucks, but a team only has itself to blame after allowing a 16-win team to light it up for a buck twenty on nearly 56% shooting. I happened to catch about a minute of the pregame show, and I heard Scott Skiles talking about Jordan Crawford and how important it would be to slow him down. I guess no one was listening, because Crawford exploded for 32. After the game, Drew Gooden made an excellent point: “It’s tough to lose games against teams that are not in the fight or in the race for the playoffs. Then again, we can’t say this is the most disappointing loss of the season. It shouldn’t have come down to this game or the next game.”

You’re absolutely right, Drew. The past month of Bucks basketball has been defined by blown opportunities. It goes back to the March 22nd dud against Boston, and those two crucial losses to the Knicks.

Carmelo Anthony is the most dangerous offensive threat in the NBA at this moment in time. Right now, he’s in a zone like nothing I’ve seen since Dirk Nowitzki in last season’s playoffs. Coming off of a 35-point triple double, Melo scored 18 points in the first seven minutes of New York’s 104-95 win over the Nets. He knocked down four three-pointers during that early-game stretch… most of which he simply pulled and popped. Transition threes are a confidence shot, and Melo was netting them last night. He went on to score 33 on just 21 shots, and I have no doubt that he could’ve dropped more had dropping more been necessary. This is the seventh time Melo’s gone for at least 30 in his last 11 games. With Anthony playing this kind of individual basketball the Knicks are obviously a dangerous team, and the East is lucky they got off to a bad start. Even with Melo shooting hotter than a flamethrower the Knicks aren’t beating Miami.

The Knicks have taken 126 threes in their last four games (an average of 31.5 a night). They’ve made 55, or 43.7%. Mike D’Antoni is sitting at home wondering where this shooting was when he was in charge. The Knicks have shot the three poorly on the season–only 33%, good..er..bad enough for 24th in the league.

Utah thrashed Portland (112-91, Harris 27 PTS) and moved into 8th place in the process. The Rockets and Suns each dropped a half game behind, falling victim to Vince Carter and James Harden. VC, who has been in full effect in Dallas’s last two games, lit the Rockets up for a season-high 23 points. He scored 10 in a row to close out the first quarter and 6 straight late in the third. Still, the Mavs trailed at that point. Four threes in the first five minutes of the fourth took care of the six-point deficit, though. Carter was responsible for one of those three-balls as well as the bucket that gave Dallas a two-possession lead they’d never lose (they went on to win 117-110 after a 39-point fourth quarter). Dirk dropped 35.

As for the Suns, they got Hardened. James and his beard returned to their old stomping grounds and went to work early. The Suns had gotten off to a great start, taking an early 21-8 lead. It was 21-11 when Harden checked in, but 29-25 (OKC) when the first buzzer sounded. He nailed three of his first four shots during that first-quarter run before going on to score 40 (FOUR-TEE). Must be nice to set a career high in front of all of your family and friends.

As you can see, Phoenix’s defense left a lot to be desired. Said Steve Nash: “I feel like we weren’t tough enough on him. We were just a little soft. On pick and roll coverage he was getting loose, and when he’s feeling it, he can make you pay in different ways.”

The good news for Phoenix: They control their own destiny. If they win out they make the playoffs. However, that seems highly unlikely with upcoming games against LA (Clipps), Denver, Utah, and San Antonio. Utah, the team with the half-game edge, has three games left against Orlando, Phoenix, and Portland (all at home). As for the Rockets, they’ve got New Orleans, Miami, Golden State, and New Orleans again. Seems easy enough, but they’ve lost five in a row and own no tiebreakers. Although Phoenix is the team in control, Utah has to be given the edge at this point. Phoenix’s schedule is brutal and the huge game between the two is in Salt Lake City. What about Denver and Dallas, you say? Well, with 2.5 and 3 game leads they’re in pretty good shape.

The Nuggets did lose to the Clippers in a game that didn’t disappoint. Kenyon Martin’s return to the Pepsi Center, where he played for seven years, had been a pretty quiet one, but he made the offensive and defensive plays of the game down the stretch. K-Mart had just one rebound, but it happened to come on the go-ahead tip in with 27 seconds to go. One of his two blocks was one that preserved the lead.

Pretty strange how Martin remained so calm throughout that whole sequence. His cool behavior was completely un-Kenyon-like, and I was more than a little disappointed. Anyway, notice that it was Kenneth Faried who failed to block out on the crucial tip in. That’s the second time this season the rookie has made that exact error. Remember when Dante Cunningham and the Grizzlies beat the Nuggets at the buzzer on February 17th? Yup.

When I said the Clipps/Nuggs game “didn’t disappoint” I wasn’t referring solely to the tight finish. At least 10 dunks were thrown down (I lost count after a while) by a wide variety of players, including Chris Paul (and with two hands, too). The completed dunks were only part of an assortment of attempted slams that also resulted in fouls and various types of misses. Blake Griffin absolutely smashed one off the back rim, once again proving that his bloopers are more incredible than the best dunk of your favorite player’s career. I think my favorite smash of the night actually came courtesy of Eric Bledsoe, who is basically a six-foot LeBron James when it comes to dunking the basketball.

Box Score Observations: Andre Iguodala’s 19 points and 13 rebounds helped the Sixers pick up a rare victory. Despite Kyrie Irving’s return (9 points, 4-10), Philly crushed the Cavaliers 103-87. Just five games to go for the Bobcats, who lost their 18th in a row. Chicago got the easy victory, 100-68. LeBron James dropped 28 as Miami beat the Craptosaurs. James Jones attempted three two-point field goals and missed all of them. Ivan Johnson posted 16 points and 10 boards in a 116-84 Hawks victory over the Pistons. How often can a team lose by 32 and maintain an average two-game margin of +3.5? That’s probably an obscure piece of history. The Grizzlies handily beat the Hornets, but Jerome Dyson exploded for 24 points in the 5th NBA game of his life. Big Baby’s 27 weren’t enough to earn the Magic a win in his old stomping grounds. Brandon Bass was nice himself with 21 points in the 102-98 Boston victory. Twenty-two players scored in a 25-point game between the Spurs and the Kings. I’ll just let you guess who won that one. Pau Gasol and Andrew Bynum absolutely destroyed the Warriors frontcourt, combining for 53 points, 20 rebounds, and 12 assists. Golden State’s F/C rotation consisted of Mickell Gladness, Jeremy Tyler, Mikki Moore (he lives!!!), and Chris Wright, so Gasol’s triple-dub should probably come complete with an asterisk.

Highlight Recap, Isaiah Thomas edition: Pass of the Year candidate right here.  I don’t even think Isaiah intended to give up the ball, but he was forced to when two defenders collapsed on him.  His solution to the in-air pickle was rather spectacular…

It’s not just the way he flipped the ball over his shoulder, but how he managed to fall out of Thornton’s way so he could lay it in.  That was f@cking awesome.  The best “Pizza Guy’s Delivery of the Game” thus far, that’s for damn sure.