Paul Silas Has Seen Just About Enough Of Tyrus Thomas 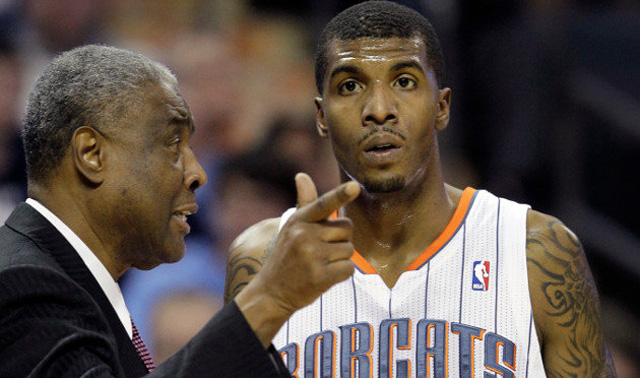 Time to add another short chapter to the horror story that has been Charlotte’s season.  I’m actually a bit surprised it took this long, but a report of conflict in the Bobcats locker room surfaced earlier today.  According to Adrian Wojnarowski of Yahoo! Sports, head coach Paul Silas became infuriated during last Sunday’s loss to the Boston Celtics when he observed Tyrus Thomas, a highly-paid letdown of a power forward, getting a little too “buddy-buddy” with the opposition.  After the game, the two shouted back and forth for a while, eventually resulting in a brief physical confrontation. That’s correct; 68-year-old Paul Silas reportedly got into it with Tyrus Thomas.  Via Yahoo!…

Several players intervened immediately and separated the coach and player, and no punches were thrown, sources said.

Silas, 68, had been incensed with Thomas chatting with some Boston Celtics players on the court, and lashed out at him in the losing locker room afterward. Eventually, Thomas snapped back at Silas, and the coach warned him to say no more or risk a suspension.

Once Thomas stood up, Silas pushed him toward his locker stall, sources said.

Bobcats president of basketball operations Rod Higgins met with Silas and Thomas, and both have been fined, a source said.

“There was an incident,” Higgins told Y! Sports. “We handled it internally and talked to both the player and the coach and moved on. End of story.”

Charlotte has spiraled to a 7-53 record, and the Boston loss had been especially embarrassing for Silas, who played for the Celtics during his career. The Celtics sat out Paul Pierce, Kevin Garnett and Ray Allen, and still won easily.

“Silas hates losing to the Celtics, and Paul was even angrier that he thought [Thomas] was acting buddy-buddy with some of their guys,” one source said. “That’s what got it going. But Paul was yelling at him over his salary, over what they have left to pay him. But it started with him saying, hey, he could live with the losing, but you’re going to be buddy-buddy as they’re beating your ass too?”

Paul Silas is an old-school, blue-collar, no-bullsh!t kinda guy, so it doesn’t surprise me that a matter of attitude is what finally sent him over the edge.  Tyrus Thomas’s involvement doesn’t surprise me either.   The Bobcats were foolish to pay Tyrus as much money as they did ($40 million) over a long period of time (5 years), and he’s had a disappointing season even on T-Time standards.  Thomas, who has faced minimal competition for minutes, hasn’t been able to produce at either forward spot.  He’s been a serviceable rotation player in the past thanks to his incredible athleticism, but he’s not even using his speed and leaping ability to his advantage anymore.  Basically, Tyrus has been spending the majority of his time hanging out on the perimeter firing mid-range jumpers… and he’s not making very many of them (shooting a career-low 35.7% from the floor).  I, a spectator with absolutely no involvement in the situation, find it frustrating to watch.  I can only imagine how fed up Paul Silas must be at this point, and I can’t fault him for losing his cool.

A 68-year-old man not only berating, but shoving Tyrus Thomas.  I’d pay to as much to see that as the Bobcats will probably end up paying Tyrus just to go away.