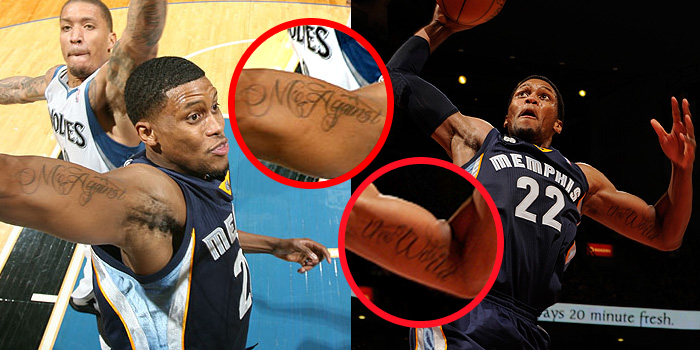 Rudy Gay has a couple tattoos.  Who knew?  I certainly didn’t, at least not until a few hours ago.  “Me against the world,” they declare; “me against” on the right arm, and “the world” on the left.  Based on a quick bit of research, it seems that he added the ink during the lockout.  I suppose he must’ve felt slighted during the Grizzlies’ 2011 playoff run… a historic one that he was forced to miss due to injury.  You may recall that some fans and analysts, including myself, questioned whether or not the team would’ve captured lightning in a bottle had Gay not gone down, and also wondered what would become of the squad upon his return.  Due to extensive time missed by Zach Randolph, we still don’t have our answer–well, not unless we listen to Rudy Gay.  Rudy’s got an answer for us… it’s tattooed on his arms, and it goes something like this: “F@ck you.”

In more acceptable terms, of course, but that’s the gist of it.

I like it.  Whether or not he swagger-jacked teammate OJ Mayo on the placement is debatable, but the message is bold, and I can see it being very meaningful to Rudy.  I’d say he’s faced a fair amount of criticism over the course of his basketball career, and this is his way of declaring war on the naysayers.  Badass… that’s what this tattoo is… and when you’re a professional athlete you can get away with having badass tattoos.  Plus, I like the OJ Mayo placement, especially for Rudy Gay.  His message will be on display every time he cocks back to drop one of his signature one-handed hammers.  That’s how I took notice.

He can’t really wear an arm sleeve anymore, though.  I mean, “the world,” Rudy?  Well what about the world?  You love it, you hate it, what?  Can’t be leaving folks hanging like that.