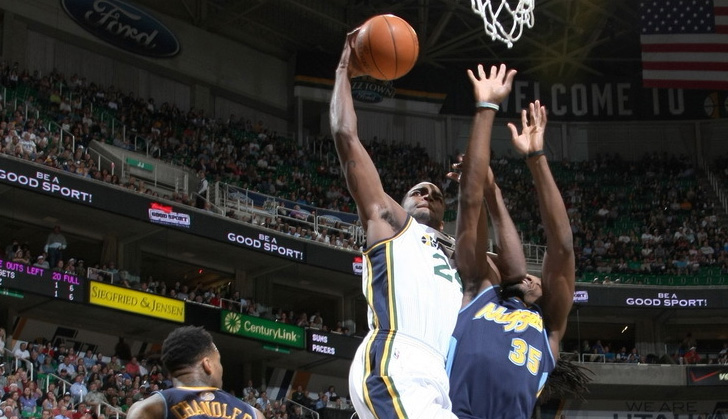 The Jazz have been getting notable contributions from a variety of players over the course of their current six-game win streak.  Young guys like Derrick Favors, Alec Burks, and Enes Kanter have had the best nights of their young careers, and veteran point guard Jamaal Tinsley has stepped in and played excellent basketball.  Paul Millsap remains Utah’s old reliable, though.  He out-performed Kevin Love in the opening game of the streak, led the team in scoring in the huge road win over the Lakers, and made a couple big shots down the stretch in the triumph over the first-place Thunder.  He only had to score 14 points as he and the Jazz crushed the Nuggets last night, but he set the tone early, scoring the game’s first basket by throwing down a powerful dunk over the athletic Kenneth Faried. Skip to the 56 second mark…

Utah went on to score 64 points in the paint… about half of their total, 121, a season high.  They shot 59.3% from the floor in the process, and that was also a season high.  Way to get your team started off on the right foot, Paul Millsap!  Honorable mentions to Mickael Pietrus (get well soon) and Ron Artest (:35).

Throwback Poster of the Day: Tony Allen goes for a swing after dunking on Lamar Odom in the NBA Finals…