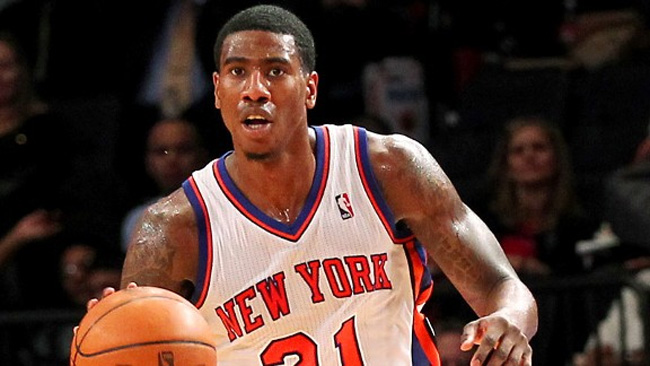 Nobody’s talking about him, but amidst all of the Linsanity, Iman Shumpert matched his career high of 20 points before fouling out in the closing moments of last night’s Knickerbocker victory… their 5th in a row.  Shumpert’s 20 points tied him with Jeremy Lin for team-high honors, and his pull-up jumper with about a minute and a half to play gave New York their first lead of the second half.  He shot 9-16, came up with 4 steals, and gave whichever Timberwolf guard who wasn’t checking Jeremy Lin fits throughout the 29 minutes and 17 seconds he played.  While I would certainly say Lin played a solid game himself (despite his 6 turnovers and poor field goal percentage), I’d also say Iman Shumpert was the best New York Knick in this particular game.  I feel that he also produced the best highlight–a mean double crossover to stellar reverse layup–but it seems that, like his performance as a whole, the excellent move flew under the radar.  It didn’t make the top 10, or even the game recap.  Hell, it barely even made it to Youtube.  Just one person uploaded the clip, and he or she did it the ol’ point-the-camera-at-the-tv-and-hold-it-steady way.  I’m enjoying the Jeremy Lin story as much as the next man, but goddamn, people…

…open your eyes.  That was a nice f@ckin’ move!  Maybe not one that leaves your mind completely blown, but one that anyone who’s ever picked up a basketball can appreciate.  It’s certainly worthy of spot in the freaking game highlights, especially considering the impact that Shumpert’s scoring had on the game.  Like I said, I’m down with Jeremy Lin, but he went 8-24.  He looked tired throughout the second half, and he needed help.  His game-winning freethrow was a gift from Michael Smith, Haywoode Workman, and Sean Wright.  It was Shumpert who hit timely buckets, and it was Shumpert who put Derrick Williams on skates.  Let’s show the young man a little love.  #Shumping.