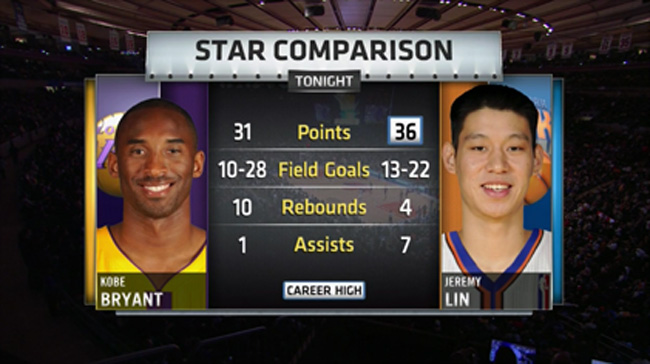 He actually finished the game with 38. And the Knicks got the win, 92-85.  It was the first Knick victory over the Lakers since February 13th of 2007, when Jamal Crawford connected with Eddy Curry for the game-winning alley-oop dunk.  More significantly, it’s the first time the Knicks have beaten the Lakers at the Garden since January 30th of the same year… back when Lin was just a freshman at Harvard.  About five years, three NBA teams, and one D-League stint later, here he is out-scoring Kobe Bryant on ESPN.  It’s an incredible story that’s been writing itself over the past week, as he’s scored 25, 28, 23, and 38 points in four games since the 4th of February.  He got the starting nod in the second game of the streak, and now he’s got more points in his first three starts than any other player since the merger.  He also boasts the highest-scoring game of any Knickerbocker this season, and most importantly, all of the Linsanity has gone down over the course of a four-game win streak.  Nets, Wizards, and two of the league’s worst road teams or not… that’s pretty f@cking impressive, and pretty f@cking hilarious when you consider the 30 combined points Amare Stoudemire and Carmelo Anthony have contributed during the stretch (that’s a total, by the way… not a per-game average).

So, what’s behind Lin’s sudden dominance? Aside from being given an opportunity like none other he had received during his NBA career, I think it’s confidence.  What else could possibly transform a 30-something percent shooter with about five and a half hours of on-court NBA experience spread out over 38 games into a 28 PPG scorer literally overnight?  I don’t think he had time to put up that many shots between his six minutes in Boston on the 3rd and his 25 points against New Jersey on the 4th.  Something simply changed in this dude’s head.  I watched him play quite a few of those garbage time minutes in Golden State, and I honestly had this guy playing overseas in no less than a few years time… either that or doing something completely unrelated to basketball.  He just didn’t appear to have that intangible quality necessary to make it on the sport’s biggest stage.  Fortunately for him, I thought, he’s got that Harvard education.  While an Ivy League degree is still an awfully handy piece of paper for the 23-year-old Lin to possess, I don’t think it’s something he’ll ever have to use unless he chooses to.  Clearly, he always did have that “it” factor… he just hadn’t shown it yet.  He’s putting “it” on display on a nightly basis in 2012, and I’m sure “it’s” already earned him a lucrative future in the world’s premier basketball league.  “It” can next be observed tonight at 8 o’clock Eastern, when the New York Knicks will be in Minnesota to take on Ricky Rubio, Nikola Pekovic, and the pesky T-Wolves (you like how I threw Pekovic in there?  Beast).  Seriously, though… Jeremy Lin has an incredible demeanor.  It’s funny, because he was over-thinking everything, lookin’ all nervous as a Warrior.  Now he’s playing instinctual basketball, and everything’s just falling into place.  As it all goes down he smiles, shouts for joy, and sticks his blue, Gatorade-stained tongue out like he’s supposed to be doing this.  It’s pretty awesome, I must say.

The Lakers need to make a move (or two, or maybe even three) to become title contenders again.  However, if Mike Brown wants to improve the Lakers right now there are a couple of things he can do.  First and foremost, forget Ron Artest even exists.  Don’t ever put him in the game again.  Plain and simple.  I think it’s been clear that his talent no longer outweighs his inability to make sound decisions, and his continued presence in the rotation has become ridiculous at this point… I mean, I think he’s had one good game since December, which was 22 games ago.  During his 11 minutes in last night’s loss to the Knicks, he became involved in some sort of… f@ck, I don’t even know what he was doing.  He was repeatedly fouling Tyson Chandler in a very obvious manner, but I’m not exactly sure what his goal was.  Anyway, bury this fool on the bench.  When a reporter asks where he is, tell that dude you don’t know who he’s talking about.  Metta World Peace?  Never heard of ‘em.

The other thing Brown can do is find time for Andrew Goudelock.  I don’t get why all of this young man’s minutes have disappeared simply because of Steve Blake’s return.  So Blake can shoot the three… okay, Goudelock was hitting them at 40% himself.  Goudelock can also get into the paint a little bit, something that no other Laker guard not named Kobe can really do.  When you’ve got the league’s 9th-worst team in scoring you’ve got to put a little firepower on the floor.  I suppose the fact that I’m suggesting that more Andrew Goudelock is the best current solution to this problem speaks volumes about LA’s roster-related shortcomings, but it is what it is.  Of all the backup guards at hand I like Goudelock best for this team.

Antawn Jamison is a 72.6% career freethrow shooter. Mysteriously, he’s become a 65.8% shooter from the charity stripe since joining the Cleveland Cavaliers.  With 3.7 seconds to go in last night’s Central Division battle against the Bucks, Jamison, who scored 34 points, needed to make one freethrow to give his Cavs the lead.  Even 65.8% would’ve gotten the job done over this two-shot stretch… but he came up empty.  Milwaukee went on to win the game in overtime, 113-112.

I was forced to miss all but the final seconds of the Clippers 78-77 win over the Sixers. I literally walked into my house and got the TV turned on/tuned to the right channel as this play was… I want to say coming together, but it never really did that.  Anyway, I turned that sh!t on and the following was happening:

Well damn, Chris.  That’s one hell of a shot.  I don’t know what more I can say about it.  Paul made a bad pass, was fortunate to get the ball back, and made a shot that had no business going in the basket–a shot I’d call lucky if it wasn’t Chris Paul, or Kobe Bryant, or someone like that shooting it.

Box Score Observations: In Detroit’s 109-92 win over the Nets, Jason Maxiell had 4 blocked shots.  Kris Humphries had 5 blocked attempts.  Yes, it was like that.  Josh Smith pleased fantasy owners with 23 points, 19 rebounds, 5 assists, and 3 blocks in a two-point Hawks win over Orlando.  Dwight Howard had 18 points and 18 boards of his own, but only one block and no assists.  In a 69-95 loss to the Bulls, the Charlotte Bobcats were led by Derrick Brown, who scored a whopping 10 points.  Jamal Crawford scored a season-high 31 points in a win over the Hornets.  Dirk dropped 33 to lead the Mavs past the T-Wolves… he’s averaging 28 PPG over the last four.

Highlight Recap, Everyone Else Edition: Jeremy Lin destroys the Lakers.  LeBron James crushes a couple of one-handed alley-oops.  Dwyane Wade with a legitimate 360 layup.  Trevor Booker slams a putback over LeBron.  Kris Humphries got stuffed 5 times, but his swat was deemed block of the night.  Check out Jonas Jerebko’s pass at #7.  Can’t say I’ve ever seen a spinning touch pass before.  Number 7, NBA?  No individual clip, Youtubers?  Wow… no love for Jerebko at all.