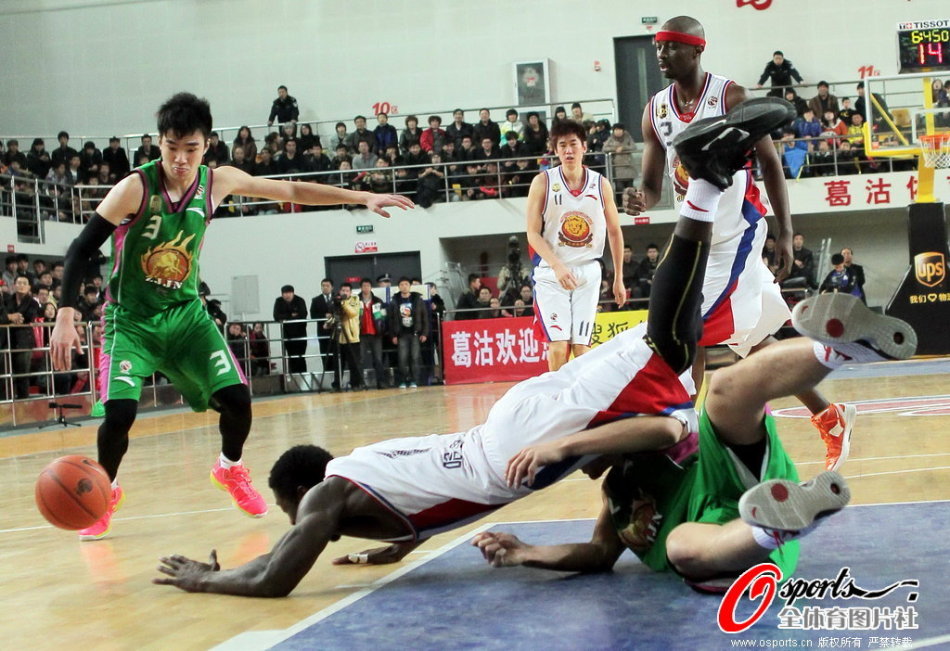 Chinese basketball is back!  Today marked the end of the 10-day break that began back on the 19th, and with just seven rounds to go (excluding today) it’s getting down to the nitty-gritty.  Every single game played this morning seemed to have meaningful implications on the standings, and aside from the top spot everything is essentially up for grabs.  I’m sorry this post is coming so late in the day… I had a very busy weekend.

UPDATE: Unfortunately, some of the information I reported about the standings in this post was incorrect.  Apparently the site I was referring to for the standings didn’t add the two make-up games played during the break.  Everything is fixed now, and I apologize for the error.  Yet another challenge of reporting Chinese basketball.

Tianjin 112, Zhejiang 104: Donnell Harvey’s 34 points included a pair of daggers in the closing moments of a surprising Tianjin victory.  Zhejiang has struggled lately, but Tianjin has been one of the worst teams in the league all season long.  Coming off a couple of losses, JR Smith played very assertively down the stretch in an aggressive attempt to right the ship.  He got himself to the line 22 times, but failed to knock down a few jumpers on crucial possessions.  He also fumbled the ball out of bounds on one occasion.  With Tianjin up 105-100 at the 1:30 mark of the fourth, Harvey looked his defender in the eye, jab stepped, and confidently knocked down a jumper.  The crowd went nuts, and it would grow even rowdier when he stamped the victory with a two-handed tomahawk slam off of a turnover.  Harvey’s 34 came with 12 boards while JR Smith added 5 assists to his 37.  Zhejiang is now in 10th place, but could’ve been tied for 5th with a win.  It’s obviously a huge loss, but their remaining schedule is easy and if JR Smith wants to he can make them a playoff team.

Guangdong 107, Jilin 94: Jilin appeared to be giving Guangdong a bit of a run for their money, but the run didn’t last long.  That being said the first 25 minutes of this game were extremely fun to watch.  Cartier Martin got off to a quick start (20 first-half points) and had Jilin up by 9 midway through the second.  Aaron Brooks then began to rain threes, though, and quickly brought his Southern Tigers back.  By halftime he had put up 19 on 4-6 from three and Guangdong led 59-54.  The first minute of the second half was amazing… James Singleton hammered down a huge putback dunk, Jilin answered with a three, but Aaron Brooks showed ‘em who’s boss with a three of his own.  It was all downhill from there for Jilin.  Cartier Martin failed to score until the 2:15 mark of the third, and they gave up far too many second-chance points.  Brooks finished with 22… Singleton had 19/13.

Qindago 103, Bayi 91: Lester Hudson scored 32 points, grabbed 10 rebounds, and dished 4 assists in Qindago’s third victory in the last four games.  Qindago moves a game closer to the top eight (Fujian currently holds the final playoff spot, they lost) with this victory, and they’ve got a relatively easy schedule coming up.  They’ll be playing Zhejiang next round in what figures to be a hard-fought battle.

Xinjiang 103, Foshan 94: Xinjiang got double figures from six different players as they picked up an easy (but much-needed) win over Foshan.  Tom Pickett led the attack with 24.  Marcus Haislip led Foshan with 26.  Xinjiang is now a game over .500, and more importantly they find themselves just a half game out of the playoff picture.

Shandong 125, Shanxi 110: Marcus Williams and Charles Gaines combined for 61 points on just 35 shots, but Shanxi simply committed way too many fouls.  Shandong went to the line 33 times and came away with 28 points.  Shanxi also gave up 19 offensive boards, 6 of which were grabbed by Othello Hunter (19 PTS/12 REB).  Shanxi now finds themselves tied for 5th rather than 4th.

Beijing 116, Jiangsu 97: Beijing (18-8) separated themselves from third-place Dongguan (16-10) with a big victory over Jackson Vroman and company.  Vroman scored 31 points and collected 13 rebounds, making him the leading scorer and rebounder, but that wasn’t enough to carry the Marcus-Williams-less squad to a victory… not that Marcus would’ve made any difference.  Stephon Marbury and Randolph Morris both had relatively quiet games as Zhai Xiaochuan led the Ducks with 25.

Guangsha 114, Dongguan 109: Big win for Guangsha, equally big loss for Dongguan.  Guangsha now trails Dongguan for the third spot by just a half game thanks in large part to Wilson Chandler’s 28 and 10.  This was Wilson’s first standout game in quite some time, and it couldn’t have come at a better time.  For Dongguan, Josh Akognon knocked down 8 of 16 threes on his way to 40 points.

Shanghai 94, Fujian 90: Mike Harris and the Shanghai Sharks move into a tie for 5th with this big victory.  This is pretty strange on CBA standards… but Harris’ 20 points and 8 boards led the winning squad in both categories.  Anthony Roberson dropped 39 for Fujian.