The Starting Lineup: Warriors Gift-Wrap Victory, Give To Grizzlies 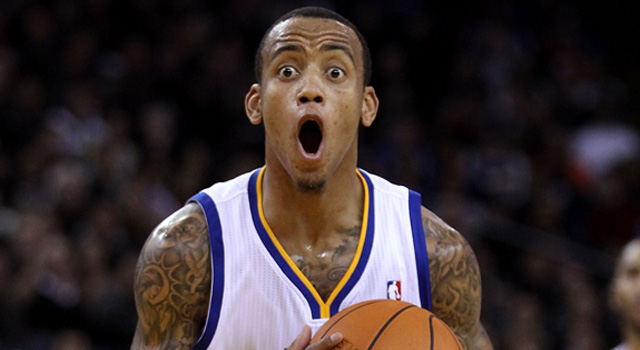 The Golden State Warriors got their second second-chance basket with 5.8 seconds left in the game.  They turned the ball over 24 times, made just 5 of 8 freethrows, and got pounded on the offensive glass… yet, somehow, they led by 16 points entering the fourth, and had led by as many as 22.  Despite the late advantage, the Warriors dropped this game (90-91) to the streaking Grizzlies, who have now won seven in a row.  They allowed 39 points in a final period during which they committed a variety of unforced errors and gave up a whole bunch of second and third looks at the basket.  It was a chokejob of epic proportions, and while I’m not trying to take anything away from Memphis, this was more of a Warrior defeat than a Grizzly victory.

There is one Memphian who deserves all the credit in the world: Tony Allen.  Allen was responsible for keeping Monta Ellis in check, and keep him in check he did.  Ellis made 8 of his 12 shot attempts, but to hold Monta Ellis to just 12 shots is an accomplishment in and of itself.  In the process Allen came up with 5 of his team’s 14 steals and also contributed 12 points and 8 boards that included a key offensive rebound and score down the stretch.

The Philadelphia 76ers are what the Washington Wizards should be.  Okay, the Sixers have a deeper roster with a bit more experience and a more prominent veteran presence, but overall these are two young, talented teams that should be on the come up.  While Philly is competing for a top-four playoff spot in the Eastern Conference, Washington is the worst team in the NBA.  The difference is all in the attitude, and it showed when they played last night.  Philly shared the ball throughout the game as they assisted on 30 of 43 field goals.  Despite shooting nearly 10 percent better, they out-hustled the Wizards to match them on the offensive glass.  Six Sixers scored in double figures, and not because they took turns taking their man off the dribble.  The Wizards really could’ve learned something from this 20-point beating.  Nick Young and Jodan Crawford should’ve been studying the ways of Lou Williams and Evan Turner, who come in off the bench and impact the game by aggressively looking to score the ball without forcing bad shots.  Andray Blatche should’ve been taking notes as Elton Brand demonstrated how a versatile big man can mix it up and produce efficiently from the inside and the outside.  Rashard Lewis could take a few pointers from Brand as well… maybe on how to remain a contributor even after becoming highly paid and somewhat washed up.  I would say Flip Saunders could learn something from Doug Collins… but he’s just been fired.  And it wasn’t his fault.  Jesus Christ may be able to walk on water, give sight to the blind, and come back from the dead, but I bet you he couldn’t coach the ’11/12 Washington Wizards to a .500 record.

Sixers rookie Lavoy Allen managed to knock down one of the great clutch shots of the early season.  His 16-foot jumper with 1:47 to go may not seem significant in a game that ended 103-83, but it may very well have prevented a riot in the City of Brotherly Love.  The Sixers had been stuck on 99 points for nearly three minutes before Lavoy finally put them over the century mark, earning 10,000 rabid fans free Big Macs.  Jrue Holiday, Elton Brand, and Evan Turner all felt the weight of the hungry hoard on their shoulders as they choked on open looks.  With each one of their bricks, the crowd became more and more anxious.  Before Lavoy finally put an end to the madness the Big Macs seemed to be in legitimate jeopardy.  The whole ordeal reminded me of that scene from Gladiator where the spectators at the Colesseum appear ready to fight to the death over the loaves of bread being tossed into the crowd.  We like to fancy ourselves an advanced species, but sh!t like this suggests that we really aren’t all that different than we were thousands of years ago.  The things that NBA basketball can teach you…

While Joe Johnson may only be worth about half of what he’s currently earning, he’s still one of the league’s better offensive players.  Johnson scored 18 of his 30 in the fourth quarter of a 97-92 win over the Bucks as he almost single-handedly delivered a road victory.  Josh Smith (of all people) chipped in with a huge three-pointer that made it 91-88 with under a minute to go, but other than that it was all JJ.  I’m not even gonna sit here and dramatize the performance because any NBA fan should know how impressive it is to put 18 points on Stephen Jackson and the Milwaukee Bucks in the final quarter of a tight contest.

Drew Gooden is one of the league’s most fascinating enigmas.  With Milwaukee struggling to get good looks early, Gooden checked in and scored five points in the paint.  He also made a good interior pass to Ersan Ilyasova for another bucket during the 14-6 first-quarter run that took it from an 11-point game to a 3-point game.  He even knocked down a huge three-ball on the possession that preceeded the aforementioned Josh Smith trifecta (apparently, Milwaukee is where non-three-point-shooters go to temporarily become deadly assassins from distance).  All of that taken into consideration, it’s still hard to determine whether or not Gooden’s contributions outweighed his mistakes.  Scott Skiles apparently felt that they did… he showed his approval by leaving Gooden in the game for the stretch run.  Bucksketball isn’t so sure, though.

Box Score Observations, Orlando Magic Edition: The Boston Celtics aren’t very good anymore, but they’re still good enough to beat the Magic by 31 on one of their worst nights in franchise history.  Orlando set new franchise lows in field goal percentage (24.6%), points scored (56), and shots made (16).  Throw in 23 turnovers and they probably would’ve lost to most other teams by at least 50.  Fortunately for them, 87 points is an explosive effort from this season’s Boston Celtics.

Box Score Observations, Stephen Jackson Edition: For the first time in his career, Stephen Jackson took only a single shot while playing more than 25 minutes.  His defense on Joe Johnson was tough (although not tough enough), but his offensive invisibility was extremely unusual.  When asked about his role, Jackson had the following to say: “That’s a dumb question, because my role was the same, I just didn’t get the shots that I should get. So, I just played defense and went out there and tried to help my team. The shots didn’t come, I didn’t force them. I don’t think my role was different, that’s just how the game go.”  Ya dig?

Highlight Recap: Nope, there will be no highlight recap today.  I’m protesting the exclusion of this Brian Scalabrine layup from the NBA’s top 10 plays of the night.