New York, Stop Counting Your Chickens Before They Hatch 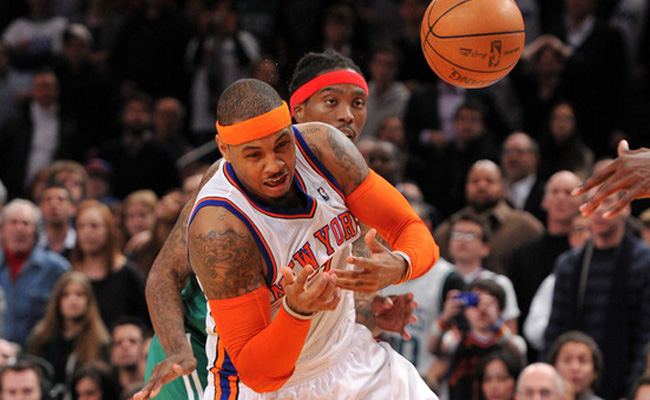 It was an impassioned battle of former Knicks and Nuggets that put Carmelo Anthony in the spotlight, but the agument that Melo’s Knicks would’ve been better served had he slowed his role could certainly be made.  Last night, Anthony needed 30 shots to reach 25 points as he committed 6 turnovers to 5 assists in a 114-119 defeat.  To add insult to injury, former New Yorkers Al Harrington and Danilo Gallinari poured in 24 and 37 respectively.  For Melo, it was the second of three games in which he’s finished with more attempts than points, but the first time he’s taken anything close to 30 shots and done such a thing.

As hard to believe as this may be, Carmelo was even worse in the early going than his 10-30 shooting indicates.  Up until the final three minutes of regulation, Melo was 3-17 with 5 turnovers.  He aggressively took the ball to the rack and hit some tough jumpers down the stretch–the stretch that extended into a pair of overtimes–which shouldn’t have taken anyone by surprise, but his clutch play that brought the Knicks back from six down with three to go was definitely overshadowed by his (and the team’s) questionable play that got them in that hole in the first place.

In case you weren’t aware, the Knicks suck.  The offense has gone stagnant, Amare has been nowhere to be found (because the offense has gone stagnant), and Carmelo is either relied upon or chooses to gun them in or out of it night in and night out.  This has resulted in a 6-10 record with a lone win over a top-eight team and two leading scorers shooting in the low 40s.  Oh, and a six-game losing streak.  The Knicks certainly have a variety of issues–all-offense-no-defense teams that can’t get it together on the offensive end don’t tend to experience much success–but the most glaring is the lack of a point guard.  The short-term hopes of millions of impatient New Yorkers now rest solely on Baron Davis… a 32-year-old Baron Davis… who is now four years removed from his last vintage Baron Davis season.

I would say the ’11/12 season is on life support, but, honestly, I had chalked it up as a lost cause before it even began.  I didn’t think the Knicks would be this bad, but I didn’t foresee a run beyond the second round in their near future, either.  With such a step forward seemingly out of the picture for the time being, the question is as follows: given some time, can this ship be righted, or is the frame it’s built upon simply flawed?  I suppose the answer to that is subjective, but I’d lean towards flawed frame.  The Knicks need Carmelo and Amare to be at their best together, and the fact of the matter is that it just doesn’t seem to be working.  That being said, the Knicks aren’t about to give up on this core so quickly.  They’ll try to tweak things here and there… maybe make a coaching change.  As a matter of fact, I think there may be only one thing that’s keeping them from doing just that.

In Mike D’Antoni’s system, a capable point guard is integral.  As poorly as he’s played for the Clippers, to bring back the amnestied Chauncey Billups would be to instantly improve this team to a .500 level.  What could the addition of soon-to-be-free-agent Steve Nash do?  He’s long in the tooth, but he, D’Antoni, and Stoudemire together have proven to be capable of a certain degree of regular season success that this franchise hasn’t tasted in over a decade.

Is the possible addition of Steve Nash reason enough to keep D’Antoni around?  I don’t know.  The (almost) 38-year-old point guard would be a temporary solution at best, and the Knicks still wouldn’t be the Miami Heat or the Chicago Bulls.  Still, to lose to the Heat or the Bulls in the Conference Finals would be a shot of enthusiasm into the arm of a basketball city that’s been down for so long.  The Knicks would become the Hawks… everyone knows they’re not going anywhere, but to pretend they’re legit would be feasible.  As sad as it may seem… that’s progress in New York.

One thing that’s for sure?  The Knicks have much work to do yet, and New York should probably stop counting their chickens before they hatch.  Skip to 5:00…

A little more professionally done, but eerily similar to the following…

…except the expectations are even higher, and the city even hungrier this time around.  I hope you’re feeling mighty spry, Baron, because this crew is on the verge of being eaten alive.