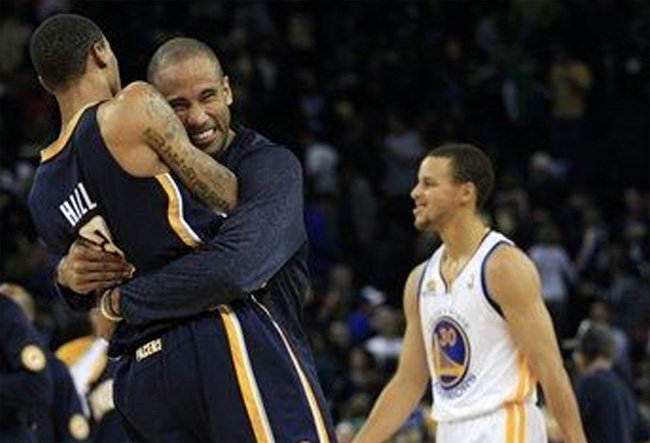 George Hill was an All-State soccer goalie in high school.  He played a little bit of soccer last night, too.  With the Pacers and Warriors all knotted up at 91, Hill was asked to keep Monta Ellis from scoring a walk-off bucket.  A tough task indeed… one that Brandon Rush, a former Pacer who is now a Warrior, wasn’t able to accomplish exactly 366 days ago.  Of course, Rush may have had more succes had he been allowed to kick Monta’s right-to-left crossover.  You won’t be able to tell what happened until the replay at the 45 second mark, but watch carefully as Hill looks down at the ball and kicks it with his right foot.

As you can see, Hill took the ball the other way and scored the game-winning layup plus a freethrow.  Mark Jackson and Monta Ellis questioned the non-call, and I sat there and wondered what they were complaining about.  I couldn’t tell the ball was kicked in live motion, so I can’t be mad at the officials.  I am mad at the basketball gods, though, for allowing such an excellent game to end on what should’ve been a violation.  This game featured more lead changes than any other this year, and Monta had been incredibly clutch on the previous couple possessions.  In order to put himself in position to try to win the game Monta had to hit a few extremely tough jumpers along with a running hook from the foul line area that was awfully similar to the one Derrick Rose made to beat the Lakers.  Some have said it was Monta’s fault because he exposed the ball, or because he waited too long to make his move… well, uh, that doesn’t change the fact that Hill kicked the ball.  Like I said, I’m not mad at the refs, it’s just unfortunate that such a great game ended this way.  The basketball gods should’ve allowed Stephen Curry’s last-second three to fall.

I sometimes see people question, what’s happened to the hook shot?  Why isn’t it utilized as often as it used to be?  It’s virtually unblockable, and very difficult to defend.  Well, hook shot aficionados, I don’t have an answer for you, but I recommend that you check out a Sixers game and pay close attention to Thaddeus Young.  The skinny, three-four tweener may seem like an unusual suspect, but this man’s left hook was in full effect last night against the Hawks… so much so that I thought I was watching boxing–or Antawn Jamison.  Yeah, Thad had one funky finish that looked so similar to one of Jamison’s signature flip shots that he could probably be sued to copyright infringement.  Thad’s running hooks accounted for the majority of his game-high 20 points as he led the Sixers to a come-from-behind 90-76 victory.  Stangely, it was the Hawks bench that was the more effective one in the first half.  T-Mac was giving Evan Turner the business in the second quarter, and I figured the Hawks were on their way to a victory… I mean, if your reserves can out-play Philly’s then you’re in great shape.  Of course, this is assuming that your starters produce something.  In the second half of last night’s debacle, Jeff Teague, Joe Johnson, Marvin Williams, Josh Smith, and Jason Collins (LOL) combined for 11 points.  Credit Philly’s activity on the defensive end.  That’s another area in which Thad Young excells… he’s extremely active deflecting balls and drawing charges.  He’s really an extremely impressive player on both ends of the floor.

If I’m the Clippers GM I fire Vinny Del Negro today.  Okay, maybe I’m being a little dramatic, but WHY do coaches continue to assign a defender to the inbounder with a second and change left in the game?  Oh, in case you haven’t heard, Kevin Love nailed a game-winning three to beat the Clippers at the buzzer on National TV last night.  The shot may as well have been a long freethrow… it went completely uncontested.

There’s no way Love should be able to get that much separation.  He’s the best shooter on the floor… you’ve got to keep somebody on him whether it’s Courtney Fortson, DeAndre Jordan, or the ghost of Darius Miles.  Hell, have everyone from entire pack chase him and let Rubio or Wayne Ellington test their luck.  That’s the obvious mistake made by the Clippers on this play, and I’m sure there have been entire blog posts dedicated to it already.  I want to talk about the positioning of Chauncey Billups, though.  Why is he guarding Luke Ridnour?  There’s not enough time to get the ball back to Ridnour for a good look.  As you can see, Ridnour didn’t even bother to step in bounds on the play.  Billups should’ve been backed off of Ridnour playing that area where a Timberwolf was oviously going to pop out for a three.  Pretty much the same exact thing happened to the Mavericks in December.  In that scenario Dirk could’ve been there to pick up Durant.  When there’s a second or so left, stop guarding the f@cking inbounder.  Have that man zone up and occupy a dangerous area instead.

As you can see, Al Harrington set a screen for Ty Lawson, and two Wizards chased Lawson out to the three-point line.  I’m guessing Flip Saunders told John Wall and Trevor Booker whether or not they were supposed to switch, yet one of them clearly didn’t know what to do.  What Arron Afflalo’s man, who also chased Lawson, was doing… I have absolutely no idea.  So, three players had brain farts, and it’s not like this was even a high-pressure situation.  Washington was probably going to lose anyway, but all they needed to do here was foul somebody.  Just about the only thing they couldn’t allow was for a guy to catch the ball under the basket and dunk it.  Being the Wizards, they allowed just that.  I’m not even mad at ‘em, though… Big Al is on my fantasy team.  Yeah, 29 points on 10-16 work for me.  Harrington for 6th man of the year!

The Boston Celtics came across two fast-break points as they lost to the Suns… 71-79… at home… as the Suns turned the ball over 21 times and shot 26% from three.  Rajon Rondo wasn’t playing?  I don’t care, that’s not an excuse to score 71 points against Phoenix.  The last time Phoenix won without scoring 80 points?  That was in 2002.  Hell, the last team they even held under 80 was the ’10/11 Pistons, which really shouldn’t even count.  Anyway, the Cs took just 9 freethrows, scored an unhealthy 28 points in the paint… yuck.  You know what this team’s problem is?  They have to tediously manufacture EVERY… SINGLE… BUCKET.  Nothing comes easy for the Celtics.  It’s actually been that way for a few years now, but it’s finally gotten to the point where it’s just so f@cking bad that their defense can’t make up for it.  The Cs are 26th in the league in scoring because they rank bottom 10 in fast break points and points in the paint.  How should they go about fixing this?  Blow it up.  Fortunately, it’s going to blow itself up at the end of the season.

My hometown D-League team has waived Ricky Davis.  He was playing poorly, but this is still uncalled for.  I’m ashamed to call myself a Mainer right now.

Highlight Recap: Jamal Crawford… dunks the ball?  Blake Griffin DUNKS THE BALL… but not on Darko Milicic.  Not at all.  Andre Iguodala with the best of his many dunks.  Brandon Jennings takes the ball from Toney Douglas and throws one down.  This is a highlight because it’s an assist by a Sacramento King.  Top 10 might have some other sh!t in it, I didn’t watch it.