Eddy Curry Could Be Playing For The Heat Tonight 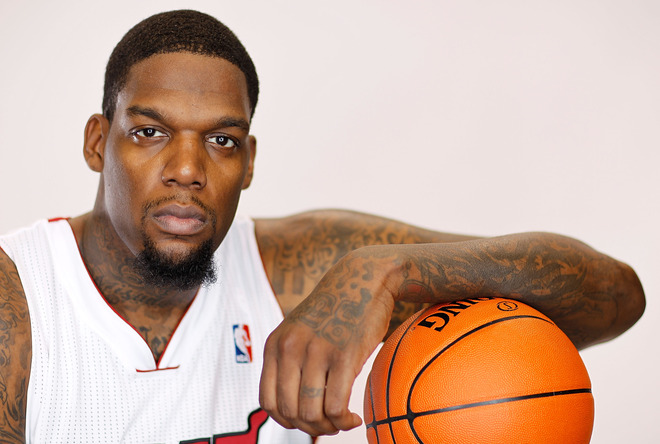 The Miami Heat will be at home to face Kobe Bryant and the Los Angeles Lakers tonight, but Dwyane Wade won’t be playing and LeBron James could also be scratched due to a case of the flu.  James isn’t the only question mark for the Heat tonight, though.  At around 8 o’clock PM, will we see Eddy Curry play his first NBA minutes since December 17th of 2009?  According to a report from The Miami Herald, it’s a possibility.  It’s been a long two years for Curry, who began his quest to get back on to an NBA floor at something like 100 pounds overweight, but he says he’s finally so close to making his return that he “can touch it.”

Like a great mountain shedding snow during a thaw, streams and rivers flowed down Eddy Curry’s face and body in torrents.

So vast was the pool of sweat surrounding this giant on Wednesday that team trainers had to mop up the water hazard after he finally finished talking with reporters.

Curry hasn’t played in a game since 2009. It has been a long and dormant winter, but the rebirth of his career is close at hand.

Curry was the last player to walk off the practice court Wednesday. For about 30 minutes, He worked underneath the basket with assistant coach Keith Askins, who used a pad to brace himself against Curry’s body blows.

Curry appears ready to make his long-awaited debut in a Heat uniform, which could come as early as Thursday night against the Lakers.

“It’s going to feel great,” Curry said of his return to the court. “It’d feel even better if I can do a Mike Miller and just go 6 for 6. I’m not anticipating that. That’s a pretty tough act to follow.”

Once a lottery pick, Curry found himself entirely out of basketball last season and his return to form has been a difficult process.

Officially, Curry is still day-to-day after straining his hip flexor at the start of training camp. The pain is gone, says Curry, and now the only thing holding him back is the cautious approach of the Heat’s training staff.

“If it doesn’t happen [Thursday] or this week, then it’s soon,” said coach Erik Spoelstra, close to the vest as always about the status of his players.

The marquee draw of Thursday’s game is an obvious one — LeBron James vs. Kobe Bryant — but for discerning fans of the Heat the debut of Curry would be just as significant.

For two seasons the Heat has searched for a center with offensive skills to match the defensive intensity of current starter Joel Anthony. Curry, once the cornerstone of the Knicks’ offense, is that great hope.

Since the start of training camp, before he even was cleared to practice, Curry watched his teammates and knew there was a need for his skills.

“Every game, every practice I’m thinking about it,” Curry said. “Even while I was hurt I really had a lot of time to watch film and just watch the guys as we played and practiced and I kind of just saw spots all over the court.

“But I’m going to be so happy to just get out there. I hope [Spoelstra] does activate me [Thursday], but if not I’m going to wait patiently and keep putting in work and when it’s time it’ll be time.”

Curry’s size could come in handy against the Lakers, who feature two of the best big men in the league: Andrew Bynum and Pau Gasol.

Of course, Curry’s minutes ultimately will be dictated by his stamina.

“If my number is called, I’m going to be winded, obviously, but a lot of that is going to be adrenaline — just haven’t been out there in so long,” Curry said.

“But eventually I’m going to settle down and my game will come out and [Spoelstra] will do a good job of getting me in and out of there, so I’m not worried about it.”

As for Curry’s body, his weight is down and he feels the results but there’s still work to do. He says he has shed so many pounds since the start of training camp that he stopped keeping track.

Exactly much does he weigh? He’s not answering that question just yet.

“It’s a great number but it’s not where I want to be yet,” Curry said. “When it’s where I want it to be, I’ll probably put a sticker on.”

Whether or not he takes the floor tonight isn’t really that important, although I’d like to see it.  If he plays, his minutes and impact are likely to be very limited.  That being said, it’s come time for Curry to show and prove.  Recent reports (such as the one you just read) have him in good shape, and there’s video evidence backing the dubious claim, but getting into shape and producing on the NBA level are two entirely different beasts.  I have no doubt that Eddy Curry can get a bucket in the post… no doubt whatsoever.  Can he rebound the ball and manage to play servicable defense, though?  A guy like Eddy doesn’t enter into the mix for a team like the Heat and immediately get a lot of touches on the offensive end.  In the beginning, he’ll be expected to do the dirty work all the time and score only when his number is called.

I love Eddy’s talent–there are few players with a polished post game like his–but I must admit that he’s never been the guy to put in work on the glass or pursue a loose ball.  The good news is that any idiot can do it… the idiot just has to want to do it.  I’m not calling Eddy an idiot–I’m saying that he’s got the tools, but simply questioning his desire.  It seems that he’s worked pretty hard to get to where he is right now, so let’s hope he doesn’t consider his goal accomplished as soon as he steps foot on the floor.

Myself?  I’ve always been an Eddy Curry fan.  I’ll be tuning in with high hopes of witnessing the comeback tonight on TNT.  If he does play I really hope he doesn’t embarrass himself… I’m sure Chuck will be dying to make a joke of the whole ordeal.  Play hard, Eddy!  NBA247365.COM will be rooting for you!