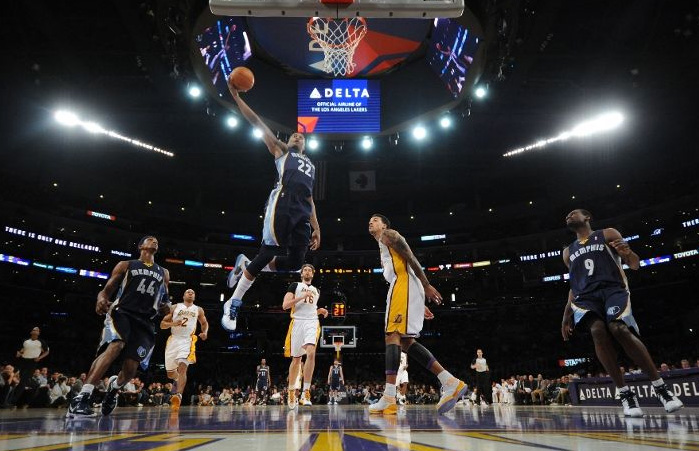 Before I get to the highlights, allow me to mention that this game featured a mid-fourth-quarter stretch so ugly it was as if neither team even wanted to win.  After making a valiant comeback during which they turned a double-digit deficit into just four, the Memphis Grizzlies settled for contested perimeter looks and went scoreless for nearly four minutes.  As Rudy Gay and OJ Mayo clunked J after J, the Lakers turned the ball over four times while Matt Barnes put their only points on the board.  I’ve always admired the grit of Matt Barnes, who was one of those unforgettable We-Believe-era Warriors, but when he’s the only dude to put a point on the board for a solid third of a period you know the game’s become something of an eye sore.  In the end it worked out for the Lakers as Memphis never recovered from the drought and went on to lose by eight.

A disappointing finish to say the least.  Fortunately, this wasn’t the games only finish, if you know what I mean.  During the most exciting minute and 30 seconds of NBA basketball that I saw all day, Rudy Gay and Kobe Bryant put on a little show for the Staples Center crowd…

Last night it was Vince, and this evening it was Kobe.  Who’s next, Jerry Stackhouse?  Sh!t, that was actually a really nice dunk from the Bean.  For but a moment it was as if he was wearing number 8, Rudy Gay was replaced by Latrell Sprewell, and Staples became Madison Square.

Patience, utilization of footwork, and a bit of cleared space.  That’s all that was to a young Kobe Bryant.  Un-be-f@cking-lievable; that’s what it was to Craig Sager and the rest of us.

This is why hating is a waste of time.  All of these special players come around once and only once.  Enjoy them.