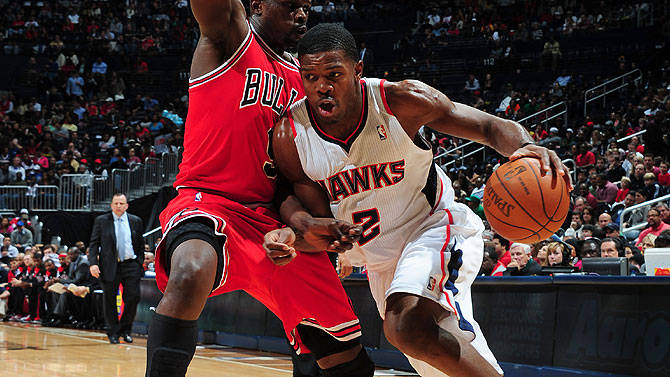 According to NBATV, teams playing in the third game of a back-to-back-to-back are now 5-0.  So, can we stop talking about it, please?  In their third game in three days, the Hawks came out with energy and crushed the Bulls 109-94 after losing to an imitation Heat team and barely beating the Charlotte Bobcats.  Sounds like the Hawks to me.  As a matter of fact, everything about this game was Hawk-like.  Atlanta led 33-18 at the end of one… then it was 45-43 with 3:45 to go in the second… and, somehow, the Hawks led by 18 again at halftime.  Actually, ”somehow” can be explained as follows: Joe Johnson, Josh Smith, and Vladimir Radmanovic went 4-4 from distance over a span of three minutes.  This is why the Hawks are the Hawks, though.  You don’t win anything of significance when it takes nonsense like this to maintain a massive lead.  The Hawks are an extremely erratic team, and this always ends up biting them in the ass.

The Raptors scored 62 points in a loss to the Sixers.  At one point Philly was on a 30-8 run as they ran away with a 35-point victory.  Said Andre Iguodala: “It’s just the nature of an NBA team to go on runs.”  Yeah… that’s like 10% nature of the NBA and 90% nature of the Toronto Raptors.  One of my favorite NBA-related cliches is it’s a game of runs, but not 30-8 runs.  That’s just a Raptor thing.  Amir Johnson resorted to NFL-style holding, but not even that worked.  Watch as he attempts to rip Elton Brand’s jersey right off of his back.

All jokes aside, coming up with 62 points in an NBA game is pretty hard to do.  Not surprisingly, the Raptors have done worse on two occasions, though.  I’m sorry, but I just can’t create a serious sentence about this game.  I tried right there, I really did.

I would call Denver’s Nene-less 117-121 loss to the San Antonio Spurs the most frustrating game I’ve watched all season.  The Nuggets were down big early, but clawed back over the course of the second and third quarters.  The problem was that every time they got within a possession or two Richard f@cking Jefferson hit a three (5-8 3FG), or TJ Ford set up an easy bucket (7 AST), or Danny Green scored a portion of his career-high 24 points… and no matter which of those it was, San Antonio’s infuriating play-by-play guy exclaimed, “OH MAMA!”  Watching an under-manned Nuggets team that I’ve fallen in love with lose in that fashion… it was painful.  It wouldn’t have been so bad if it wasn’t the f@cking Spurs–the team that’s been washed up for three or four seasons yet remains a pain in my ass.  Nothing ruins a game like a Spurs broadcast.  I’d rather listen to Doris Burke.

Utah @ Golden State started at the same time as Milwaukee @ LA (Clippers).  However, the two games ended about a half hour apart.  I may be exaggerating slightly, but man, that Bucks/Clipps game came with more stoppages than road construction.  The Bucks are known to up the ugly factor, but the officials chipped in big time by electing to call a tight game… at least up until the final few minutes, when I figure they decided they just wanted to leave.  The game had no flow whatsoever until the third quarter, which was the only one worth watching.  That was when the Clipps finally strung together three or four possessions where they could run without interruption.  They led from there and took it 92-86.  At least we caught a glimpse of Lob City… for a while it looked like the only alley-oop was going to be a second-quarter connection between Brandon Jennings and Ersan Ilyasova.

Chris Paul is a remarkably smart basketball player.  Yeah, I’m captain obvious, but get this: the Bucks went to a hack-a-DeAndre on one possession, and as Chris saw DJ being fouled he wound up and launched from halfcourt.  If he had made the shot the correct call would’ve been to count it and send DeAndre to the line because the ball was already being released as the whistle blew the play dead.  I’m sure the officials never would’ve allowed it to go down that way, but who even thinks of doing that?  I was impressed.

Blake Griffin blocked two shots.  He had a grand total of one through the first five games, and 45 all of last season.  I don’t care if it’s blocking shots, taking charges, or bodying up like Chuck Hayes, but Blake needs to find a way to make more of an impact on the defensive end.  He’s waaay too strong and athletic to continue to be a non-factor defensively.

Monta Ellis missed an uncontested dunk early in what ended up becoming a one-point loss to Utah.  He also turned the ball over with about 30 seconds remaining, resulting in Gordon Hayward’s game-winning freethrow (which came on a questionable call, in my opinion).  After that, he missed a potential game-winning fader at the buzzer.  Roughest 32-point night of his career?  Probably, especially considering the five-game losing streak that Golden State is on.

Yi Jianlian teamed up with fellow Maverick Sean Williams, Greg Ostertag, and a dude named Booker Woodfox for the Texas Legends last night.  Somehow, this crew lost to the Austin Toros 108-93.  Pretty inexcusable if you ask me.

Ostertag may want to consider the WNBA with that rack.  Jesus, he really let himself go.

Eric Maynor suffered a nasty knee injury as he drove to the basket against the Houston Rockets.  I don’t believe that the extent of the injury has been determined as of yet, but I’ll keep you posted.  This is a huge blow to the Thunder and an even bigger one to Eric Maynor, obviously.  Hate to see this.

Box Score Observations: Gordon Hayward had 18/6 in Utah’s fourth win in a row.  Kris Humphries had 25/12 in a loss to the Heat.  Brandon Knight scored 19 points and grabbed 6 boards as the Pistons fell to the Knicks.  Dallas beat the Hornets, but Dirk had 10 points on 2-11.  This dude is killing my fantasy team.  Ian Mahinmi, who has been pretty damn solid this season, posted 13/7 with a block off the bench.

Highlight Recap: Sorry, nothing but the top 10 again…

One Response to The Starting Lineup: Hawks Abuse Bulls In Third Game In Three Days