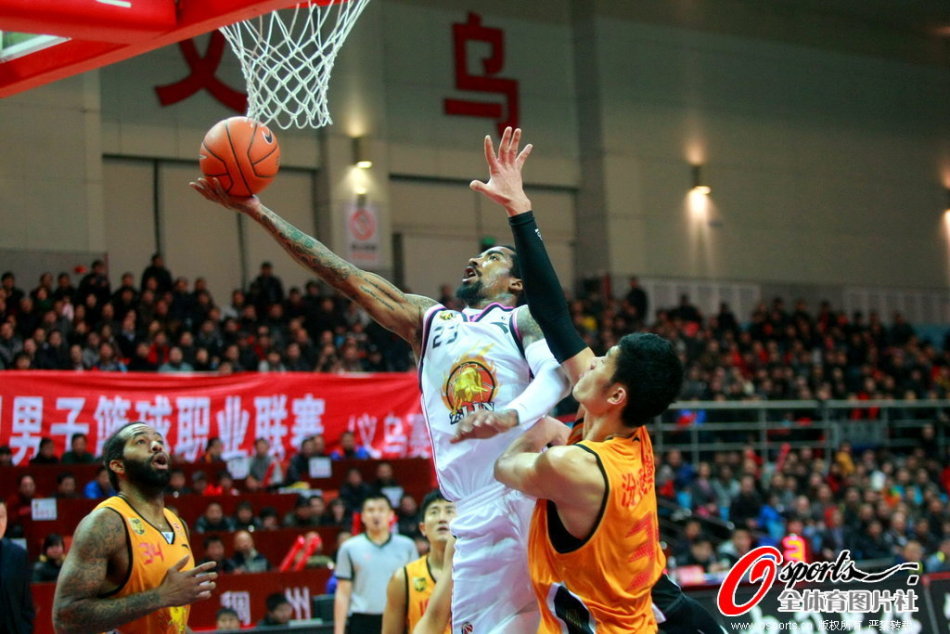 JR is averaging nearly 35 a game this year, so he obviously looks to score the ball a fair amount of the time, but his 38 shots and 21 freethrows are a good indication of exactly how aggressive he was in trying to score the ball today.  He looked angry throughout the game and drove the ball to the basket more frequently than he has in any other game I’ve seen.  He took the bulk of his threes trying to bring Zhejiang back at the end.  He began by knocking a few down, but then a string of misses began in the final minute or two.  He didn’t have his best shooting night by any stretch, but he was better than his stats suggest.

Marcus Williams was incredible, obviously, and has been over the last four games.  During this remarkable four-game stretch he’s made 50 of 59 shots and averaged 39 PPG.  Yeah… wrap your brain around those numbers.  Simply unbelievable against any level of competition.

You probably can’t tell from that poor-quality video, but JR was wearing silver sneakers with lime-green laces.

Shandong 102, Liaoning 94: Shandong’s Othello Hunter returned after missing a game with an ankle injury.  He proved to be a big help, scoring 22 points and grabbing 14 boards on 9-13 from the floor.  Alan Anderson followed up a 50-point game with another 30 to lead Shandong.  Rodney Carney (27 PTS) was one of six Liaoning players to score in double figures, but that wasn’t enough to top Shandong’s two-man wrecking crew.

Dongguan 91, Tianjin 89: Dongguan narrowly escaped with a victory after being out-scored by 11 in the first quarter.  Shavlik Randolph didn’t shoot well, but he contributed 22 points and 18 boards to the winning effort.  He did make all nine of his freethrow attempts.  Tianjin’s Donnell Harvey had a pretty awesome line–22 points, 21 boards, and 5 assists on 9-13.

Shanghai 97, Guangsha 88: Shanghai gets their 7th win in a row, and an impressive one at that.  Although they’ve lost a couple in a row now, Guangsha has been a top team all season long, and especially tough since the acquisition of Peter John Ramos.  They may want to consider getting Ramos more involved… he’s been quiet in both recent losses (just 8 shots today, but 14 points and 13 rebounds).  Wilson Chandler made just 8 of 23 shots and summed up Guangsha’s game-long offensive struggles with a high-arcing three from the corner that came down on top of the backboard.  Former NBA player Marcus Landry, brother of Carl Landry, participated in his first game with the Sharks.  He scored 12 points in 26 minutes.  Mike Harris was as big as usual with 29 points and 9 rebounds.

Guangdong 127, Qindago 117: Maybe if Lester Hudson could have made more than 2 of his 14 three-pointers…  I feel like leaving it at that, but I guess I’ll tell you that Guangdong got double figures from eight players as they demonstrated the anti-Qindago way of doing things.

Fujian 109, Beijing 105: I’m going to have to watch a Ducks game to see what the hell is going on with Stephon Marbury’s crew.  They’re losing to everybody now and have only avoided a serious dive in the standings because other top-ranking teams have been losing as well.  Starbury scored just 13 points today as Fujian’s Anthony Roberson put up 27.  Will McDonald had 41/17/6… not bad.

Jilin 98, Foshan 78: Foshan went 38% from the floor yet somehow got pounded on the offensive glass in this 20-point defeat.  Jilin only got 15 from their big-name scorer, Cartier Martin, but got 23 a piece from Jameel Watkins and Li Tao.  Foshan got nothing from anybody.

Jiangsu 97, Xinjiang 84: Last round’s performances by Xinjiang’s Tim Pickett and Gani Lawi were encouraging, despite a loss to Zhejiang… but now they’ve gone and dropped one to lowly Jiangsu.  After his impressive debut, Picket had a rough day, going just 3-21 from the floor.  Lawi put up some incredible numbers–30 points and 26 boards–but they didn’t translate to a victory.  Jackson Vroman led Jiangsu with 25 and 11.

Check back soon for a video or two.