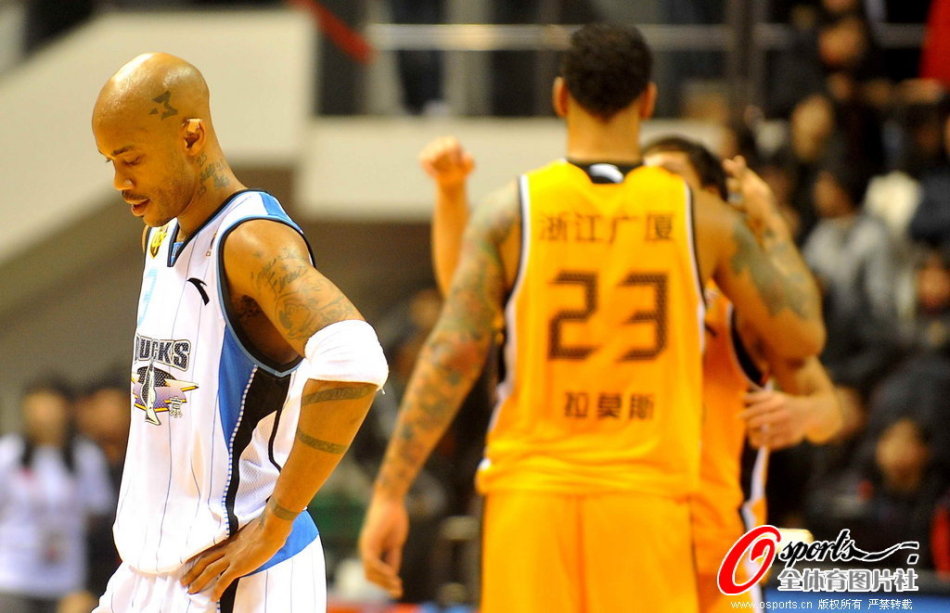 Guangsha 118, Beijing 112: Beijing got off to a strong start and Stephon Marbury finished with 34 points, but the Ducks blew a fourth-quarter lead and lost their third game in a row.  They held a 10-point lead at halftime, but it slowly slipped away as Wilson Chandler and Peter John Ramos began to impose their wills in the paint.  When Guangsha finally tied the game at 110 with a minute and 48 seconds to go, it was on a PJR offensive board and layup.  This came just after Randolph Morris fouled out; a development that would prove to hurt Beijing as Guangsha took the lead and finished them off.  Up 114-110, Wilson Chandler took Stephon Marbury to the basket.  He missed, but he was able to grab his own rebound and stick it back in, icing the game.  Had Morris been in the game his size may have prevented some of Guangsha’s paint points in the final two minutes.

Chandler put up numbers similar to the ones he was putting up early in the season; his 44 points, 18 rebounds, and 4 assists may make up the best line he’s posted all season.  Peter John Ramos was also excellent with 26 points and 14 rebounds on 9 of 14 from the floor.  Marbury’s 34 came with 9 assists and 6 boards, but he was unable to match the impact of Chandler and Ramos at the end of the game.  This would’ve been an excellent win for the Ducks, but instead their surprising losing streak extends to three games.

Dongguan 110, Shanxi 91: Dongguan dropped 65 points in the first half alone as they crunched Shanxi by 19.  Josh Akognon made more three-pointers than the entire Shanxi squad as he scored a game-high 35 points.  In addition to long-range shooting, offensive rebounding was key; Dongguan earned themselves 17 extra possessions over the course of the game.  Marcus Williams and Charles Gaines scored 24 and 23 points respectively for Shanxi.

Liaoning 117, Zhejiang 95: I think Zhejiang should consider starting JR Smith.  They often fall behind early in games while he’s sitting on the bench, and making comebacks every night probably gets exhausting.  No comeback was made at all in this one, and minutes after the game JR was on twitter expressing a desire to return home.  I’ll let you decide what you want to make of that.  Rodney Carney led Liaoning with 33 points, and Josh Powell had 26/13.  Josh Boone put in a lot of good work on the offensive glass on his way to a game-high 36 points, but some 2-14 three-point shooting left an awful big mess for him to clean up.  JR finished with just 24 points… an unusually low-key game for him.

Guangdong 106, Bayi 105: Guangdong was able to eke out this W over the Rockets due to a 23-9 advantage on the offensive glass.  James Singleton grabbed 8 of the offensive boards and scored 18 points.  Aaron Brooks dropped 20, a team-high, and was largely responsible for the game winner.  He didn’t score it himself, but his penetration created a missed layup that eventually led to a tip in.  Guangdong is now tied with Beijing for first place at 13-3.

Fujian 115, Xinjiang 92: I think it’s fair to call Xinjiang’s ’11/12 season a disaster… at least to this point.  Patty Mills missed another game with his hamstring injury as the Flying Tigers dropped their third in a row.  On a positive note, one of their Chinese players, Xu Guochong, put on an unbelievable display of efficiency.  Not often does a man score 46 points on 15-22.

Qindago 100, Foshan 88: Lester Hudson’s 37 points, 6 rebounds, and 12 assists got the job done.  The line was almost impressive enough to make me overlook his 3-13 shooting from long distance.  Almost.

Jilin 111, Jiangsu 105: Cartier Martin doesn’t seem to have played for Jilin, and Jackson Vroman did 37 and 14 for Jiangsu… yet they still lost.  I think Marcus Williams needs to start playing better; he had just 13 points on some pitiful 5-18 shooting.

Shanghai 93, Tianjin 81: Mike Harris scored 27 points and grabbed 11 boards to lead Shanghai in both categories and they beat Tianjin by 12.  Tianjin left 10 points at the freethrow line and missed 27 three-pointers.  Add it to the list of the 11 ways to lose they’ve discovered so far this season.