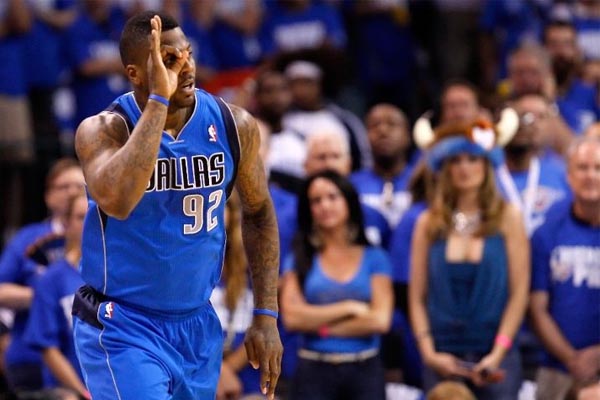 Tired of DeShawn Stevenson?  Well I’m not, so that’s too goddamn bad!

Before I get to talking about last night’s game, I’d like to announce that I’ve dropped the price of my NBA247365.COM t-shirts from $20 to $15.  Apparently, a new level of swag isn’t worth $20 to… anybody.  So, $15 it is, and the shipping is still just $5 no matter where you live.  I don’t think I could ship a shirt to my neighbor for five bucks, so that’s a bargain.  They aren’t cheap shirts, either… they cost me over $7 each to make (I had them done by a professional screenprinter on high quality shirts), and with shipping typically costing me upwards of $5 I’m not really making anything, and I’m certainly not trying to rip you off.

GET YOURSELF A T-SHIRT HERE!

Moving right along… the Dallas Mavericks picked Oklahoma City’s defense apart with surgical precision for the first 24 minutes of game three, and appeared to be on their way to a rout.  However, [NBA] basketball is a game of runs (that’s one of my favorite basketball-related sayings because it’s so true), and OKC made one.

The Mavs began last night’s contest on a 9-2 run that didn’t leave a hungry band of Thunder enthusiasts much to get excited about.  DeShawn Stevenson got the ball rolling with his first of two threes, then Tyson Chandler/Shawn Marion combined to score three consecutive layups.  Dallas’ ball and man movement were both on point early on in this game.  They were getting extremely easy looks right at the rim, and when they couldn’t get those it was a wide-open jumper.  Dallas was already leading 11-4 by the time Dirk Nowitzki even scored a basket in this game, and the other guys on the floor were Jason Kidd, DeShawn Stevenson, Tyson Chandler, and Shawn Marion.  That’s how easy Dallas was scoring.  Stevenson scored a driving layup off the dribble, the first two-point basket I’ve seen him make since his time with the Washington Wizards.  The Mavs were making it look far, far too easy.  The Thunder, on the other hand, couldn’t make a goddamn thing.  They had eight points with just over two minutes to play in the first, and they trailed 27-12 when the period wrapped up.  The second quarter was essentially a repeat of the first for Dallas, but more NBA-like for the Thunder… Dallas added 25 more to their total, but they only out-scored OKC by one.  Nick Collison and Serge Ibaka put in a little work in the paint early on that helped the Thunder get a little somethin’ going, and Russell Westbrook manufactured a few points.  Still, OKC trailed by 16 at the half, and Dallas hadn’t even gotten much of anything out of Nowitzki yet.  It certainly wasn’t looking too promising.

I’ve got to give Thunder fans some props here: with their team down 18 early in the third, showing no signs of life on either end of the floor, they continued to cheer and chant as if their heroes were ahead by double figures.  I’m not a big fan of the way the team was taken from Seattle, but hey, these Oklahomans have been very supportive of this basketball team, and the Ford Center seems to have a really great atmosphere.  It’s no Oracle Arena circa 2007, but it’s definitely one of the league’s livelier venues.  So, there the Thunder fans are, loudly chanting “O-K-C!” with their team down 18… and Russell Westbrook launches an airball.  The chant died, and I figured the Thunder died with it.  To me, that was the low point of the game for them… I didn’t take note of the exact time when it happened, but looking back at the play-by-play, I believe it was around the 11-minute mark.  They’d actually end up trailing by as many as 23 (23… yes, that’s the same defecit that Brandon Roy and the Blazers came back from to beat the Mavs in the first round), but they’d cut it to 14 by the time fourth quarter was set to begin.  Dallas was only able to score 18 points in the third… they really needed a little boost from Dirk at that point, but they weren’t getting it.  Nowitzki had just one basket in the period.

So, even though the Mavs aren’t getting much from Dirk, the role players have produced enough to have them up 14 with just a quarter to go.  I told you earlier that the Thunder would make a run, though, and here is where it began: OKC inserted some offense in the form of James Harden and Daequan Cook, and made four of their first five shots of the quarter… lead down to 10.  Russell Westbrook then exploited a size mismatch with JJ Berea on like four straight possessions… that resulted in an 8-2 Thunder run, and made it a single-digit game for the first time since early in the first.  Jason Kidd had to be brought back into the game at that point, and with their lead cut to seven, they once again looked to Dirk Nowitzki to bring it home.  Fortunately, for the first time in this game, he was able to deliver.  Three of his seven buckets came in the final 5:13 of the fourth, and he made a couple freethrows, too.  There were a couple of misses, blocked attempts, and a turnover mixed in there, but he made enough shots to get the job done, and I suppose that’s all that matters.  Dallas ended up taking it 93-87–it really wasn’t as close as it looks–OKC never was able to get over the hump.  Said Nobrickski (I like Dirk, and he’s playing great, but I also like that nickname): “We didn’t really have a lot going in the second half offensively, so I’ve got to keep attacking for this team like I have for the last 13 years. This team needs me to score and to keep being aggressive.”

Nope, they certainly didn’t have a lot going on offensively in the second half, but they got off to such a strong start that they were able to build an insurmountable cushion.  I believe it was after game two that I said OKC would have to play much tougher defense if they want to win this series.  They certainly didn’t bring the kind of D I called for in this game.  Dallas got whatever the hell they wanted in the first half…  Shawn Marion was running rim to rim for easy buckets (18 points on 9-13), and guys like Stevenson and Stojakovic were left open on the perimeter (OKC’s defensive rotations were pretty weak… Dallas got a ton of open looks… they made seven threes to OKC’s one [that was on 17 attempts, too]).  The stats don’t indicate how well Dallas played in the first half because they struggled so much in the second, but even at 44 percent for the game they out-shot OKC by nearly eight percent.

To sum everything up: Oklahoma City allowed far too many open looks in this game.  Tyson Chandler was 3-3.  Shawn Marion was 9-13.  DeShawn Stevenson only had to take three threes to make two.  Dirk didn’t kill ‘em, but it was made far too easy for the other guys to pick up the slack.  Jason Terry didn’t even have a good shooting night… it was the guys who are in the game for defense doing a large portion of the scoring.  To me, that indicates a lack of defensive intensity and discipline on OKC’s part.  Marion/Chandler/Stevenson aren’t the most gifted offensive players in the world, but they’re in the NBA for a reason: give them wide open looks, especially layups, and they’ll knock ‘em down at a pretty good rate.  You can’t just allow them easy shots and expect that they’ll miss… you have to make them miss.  It shouldn’t take much; just keep Chandler and Marion out of the paint, and get a hand in Stevenson’s face.

Russell Westbrook had another one of those 30-point games that left me feeling not as impressed as a 30-point game usually leaves me feeling.  I’ll give him credit for leading that late push that came up too short, but I’ll also show you his seven TOs and 8-20 shooting.  There were times when Kevin Durant had Peja Stojakovic on him in the first half and he wasn’t given the ball.  I don’t care if KD is on some 7-22 sh!t…  I’ll put his O against Peja’s D and live with the results.  Russell Westbrook isn’t a point guard.  He’s an undersized shooting guard that can’t shoot.  He’s a very talented player that can help a team win basketball games, but OKC really needs a point guard right now.  As great as Dallas looked in the first half, that’s how bad OKC looked.  They were getting contested jumpers with the shot clock winding down.  A point guard’s solution?  Run some offense, try and get some movement going, get the ball to the superstar.  Russell Westbrook’s solution?  Play one-on-five.

James Harden has credited Baron Davis as the inspiration for his beard.  Apparently, the art of beard growing isn’t the only thing that Harden has learned from The Baron…

That……… was shameful.  I can’t believe Mark Jackson described that as “making a play.”  Yes, you play to win the game… but there are some things you just don’t do… and flopping like that is one of them.  I’d rather lose, or see my team lose, than win by one point because of some sh!t like that.  There’s no honor in that “play,” James/Mark.