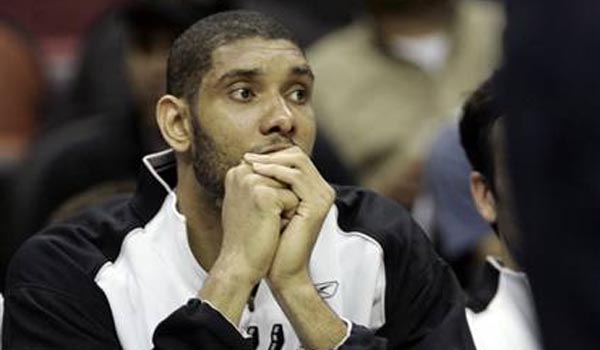 Hey everybody! I have been searching for a decent topic to write about all week long.  I was thinking about discussing the Portland Trailblazers and LaMarcus Aldridge (who has been on a tear)… I thought about exploring the Lakers’ recent struggles (no fun for me)… and I decided I was basically gonna wait it out until I found something worth writing about.

I found myself watching the Lakers/Spurs game on Tuesday night–yes, the one where the Lakers struggled to defeat a Spurs team that played Danny Green for 21 minutes. Even though I was shocked that nobody could defend Matt Bonner, the lasting image in my mind is when the camera cut to Tim Duncan, not suited up, grinning like a child after Bonner hit a trey off the dribble.  Reggie Miller said some good words about Timmy, and the game resumed; but the image of Duncan cut deeper into my mind.

A former great has deteriorated in front of our eyes.  Tim Duncan isn’t–and never again will be–the same player he was five years ago.  He is no longer the defensive cog who could rip down every board when he wanted to; he no longer possesses the ability to score in the post at will, and  he can’t carry the Spurs on his back for long periods of time.  These were all traits the younger Duncan had that made him, in some folks’ minds, the greatest power forward of all time.

My memories of Duncan include his three NBA titles, his heroic performances throughout the playoffs (many of which at the expense of my Lakers), and his consistency throughout every regular season for the past 10 or 12 years.  Legitimately a good guy, Duncan was a staple during All Star weekend and often had his squads alive deep in the playoffs.

It isn’t like Duncan has suddenly become a bad player… he just isn’t elite anymore.  He still put up 14 and 9 and shot 50% on the one seed in the West.  Those are good numbers… just not Tim Duncan numbers.  He is visibly less aggressive and careful when picking his spots to try and impose his will.

I think the individual sacrifices Duncan has made for the Spurs over these past couple seasons are commendable.  Popovich approached him, told him the team was taking a new approach (faster paced, more possessions, more points), and leaning on younger guys to carry more weight (Gary Neal, George Hill, Dejuan Blair, etc).  The result was a 60+ win team and newfound energy in San Antonio.  Did we hear one bad word out of Duncan’s mouth? Not one. He epitomizes a lot of the good about the NBA.  He is one of those few superstars who got drafted by a small market team and made it to the very end.  Same fan base, same black ‘n white uni, same coach.  The NBA is trending towards a time where the players have the ultimate say.  Carmelo wasn’t happy losing in the second round every year in Denver, so he bolted to New York.  LeBron was afraid he would never win the big one in Cleveland, so he took his talents to South Beach.  The Utah Jazz were forced to deal Deron Williams out of fear that he would bail on them at the first chance.  Can you picture the Spurs trading Timmy?  Can you see Tim Duncan leaving in free agency to play with another superstar?  Never in a million years.  He is, and always will be, the face of the San Antonio Spurs franchise.

Timmy truly has had one of the classiest careers in NBA history, but I feel like he’s become a little underappreciated lately.  It really is true when they say “you don’t know what you got until it’s gone.”

Thanks readers, I’m out.

This entry was posted in Adam's Random Ramblings. Bookmark the permalink.