Posted on November 5, 2010 by Stephen Coston

It’s certainly not as exciting as most of the other excellent posterizations we’ve been blessed with so far this season, but as I say after almost every two-game Thursday, it’s better than nothing.  I’m a little disappointed in Amare Stoudemire… this was the Knicks fourth game of the season and he’s yet to dunk on anybody.  So Danilo, I commend you for trying to pick up your teammate’s slack, although it’s really not the same. 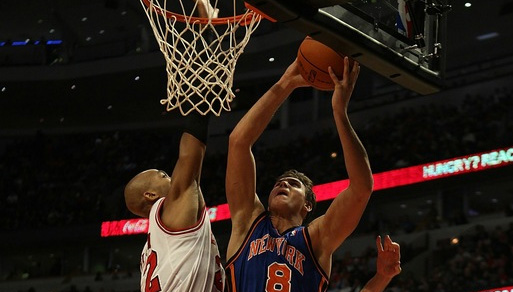 I couldn’t find a video of the dunk by itself, so here’s yesterday’s top five plays, see #5.  Also see #1, because that dunk is straight filth.  It’s a shame no one got in Derrick’s way on that play.  It could’ve been his dunk on Goran Dragic all over again.

Throwback Poster of the Day: This isn’t much of a throwback seeing as it just happened last season, but any time Danilo Gallinari and dunk are put in the same sentence this comes to mind…

The crossover, the dunk, the post-dunk pose, Clyde describing it as a “master blaster”… everything about that play was just pure win.