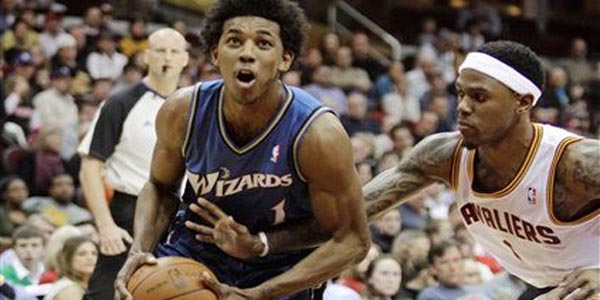 The guy in the blue shirt dropped 31 to lead the Washington Wizards to their first victory outside the city limits of our nation’s capital in the NBA247365.com era.  That’s right… last time the Wizards won on the road this site didn’t even exist.  Do you remember what you were doing last April 9th?  I was watching my main man Sonny Weems drop 18 on the Atlanta Hawks.  Cleveland Cavalier fans were cheering for the squad with league’s best record as they faced the Indiana Pacers.  The Cavs lost that night because LeBron had called it a season… little did those poor Cavs fans know that this was a scene they’d have to get used to, as they had already seen the King play his last regular season game in a wine and gold jersey.  The Boston Celtics?  They were the Wizards’ victims… sputtering towards the playoffs, losing three of their previous five.  They weren’t really playing like NBA finalists, that’s for sure.  Oh, here’s a funny one: Brook Lopez was busy grabbing 14 boards in his 33rd double-double of the season… who would’ve thought that damn near a year would pass and he’d only record two more of those tricky double-doubles.  The league has changed quite a bit since the last time the Wizards won a road game… I wonder what’ll happen before they manage to do it again?

Quote of the Day: Wizards coach Flip Saunders on his pregame thoughts…

I bet he had that amazing “whoa, I had no idea there were five bucks in my pocket!” feeling after this victory.  Good for him.

Photo of the Day:

Z-Bo and I both hope that yours doesn’t suck as much as mine probably will.  NBA247365.com, where non-sports-related losing streaks longer than those of the Cleveland Cavalier franchise happen.