Posted on February 6, 2013 by Stephen Coston 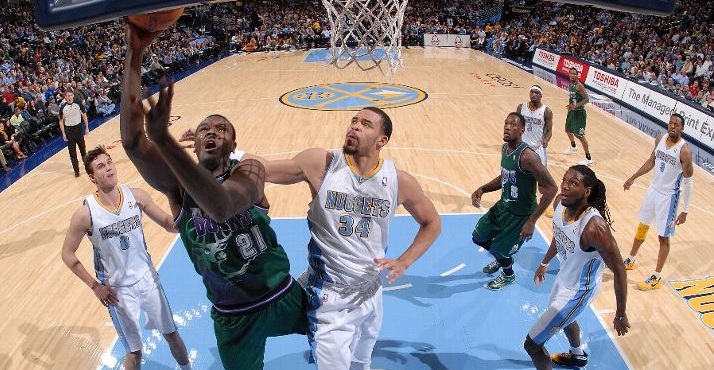 With four minutes and 22 seconds to go in the first quarter of Milwaukee’s eventual loss to the Nuggets, Samuel Dalembert checked in.  Seven minutes and 26 seconds later, Dalembert had 14 points.  Come halftime, he had 21.  On the first possession of the fourth quarter, he topped 30.  At that point he’d missed just one shot, and having made 15, he was actually besting LeBron James’ incredible 13-14 performance from Monday night.  Slammy D would go on to make one more field goal before finally missing a few, but he still finished with a ridiculous 35 points on 17-21.  Needless to say, all of those numbers are career highs (they have to be; I’m not even going to look it up). 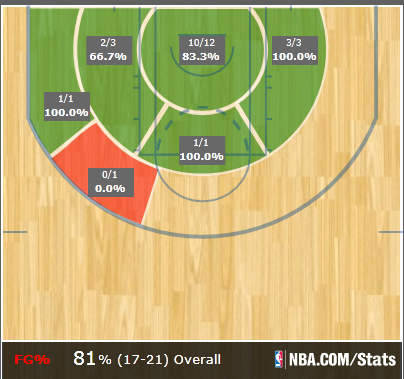 Samuel Dalembert sets a Bucks season standard for field goals in a game (via SBNation).

Despite Samuel Dalembert scoring 19.2% of his total points this season in 27 minutes and 7 seconds, the Bucks managed to lose by eight, 112-104.  My theory is that Brandon Jennings and Monta Ellis sabotaged Dalembert’s effort.  After all, it’s not like Jennings and Ellis to play so erratically as to turn the ball over three times in the last two minutes whilst also going a combined 0-2 from the floor.  Oh wait…

Anyway, if you’re curious to see what Samuel Dalembert scoring 35 points looks like (and you know you are), here are his complete highlights…

ROFLMAO @ Nuggets’ color commentator Scott Hastings saying, “you can’t let Dalembert come in and do that” after he scored his first field goal.  Like the rest of us, Scotty obviously failed to foresee Sammy Dumbles making 16 more baskets this season, let alone in this game.  Also, it turns out the Nuggets could in fact allow Dalembert to come in and do that.  After all, he did, and they won.

Who even tries to two-foot leap from beyond the dotted line and posterize Larry Sanders?  That’s why they call him “The Manimal,” I suppose.

Danilo Gallinari led the Nuggets with 22 points and made this circus shot to ensure victory/score Nuggets fans some inexpensive tacos (nope, they’re not even free in Denver).

Who are these Indiana Pacers? Just two nights after dropping 111 on the stingy Chicago Bulls, Paul George and company scored 114 points in a comfortable victory over the Hawks, who finished with 103.  Only four times all season have the Pacers reached the 110-point milestone, and not until that aforementioned matchup with the Bulls had they done it in a non-overtime scenario.  Indiana still ranks second to last in PPG at 92.8, but they’ve topped 100 in 7 of their last 11 and are averaging 99.27 PPG over the same stretch.  For the record, they’ve gone 7-4 (.636) and are now 30-19 (.612) on the season.

Unfortunately, neither the performance of Paul George (29 points, 5-9 from three) nor any other player took precedent in this contest.  Three other uniformed participants — Bill Kennedy, Josh Tiven, and Scott Wall — stole the show instead.  Despite what the final score indicates, this was anything but a fast-paced shootout.  An excessive total of fifty-nine fouls were called, including one flagrant and one technical, that led to 68 free-throw attempts as well as one lengthy delay in the action.  For reasons unclear to anyone but the three officials, it literally took upwards of 10 minutes to assess a questionable flagrant penalty one to Al Horford for dropping his arms atop a driving DJ Augustin.  The confusion apparently stemmed from the timing of the foul, as Horford’s blow to Augustin was preceded by an inadvertent Augustin elbow to Horford’s testicles.  As he explained the situation to both coaches, head referee Bill Kennedy could be heard saying, “it’s a flagrant one even though he got hit in the nuts.”  Apparently, his coming to this conclusion required that he huddle with his fellow officials, go to the replay monitor, huddle again, go back to the replay monitor, and ultimately stop the game for nearly a quarter’s worth of running time.  It seems to me that Bill Kennedy simply enjoys stalling.  He caused this game to last 17 minutes longer than any of Tuesday’s other contests and displayed his utter shamelessness by calling an incredibly ironic delay of game on the Pacers.

Josh Smith made his first jump shot of the evening… then, to the surprise of no seasoned NBA spectator, proceeded to have one of those games.  He finished 4-12 with 9 points and 4 turnovers.  I’m going to laugh really hard when some idiot and his losing organization actually make Smith the “max player” he believes he is.  You just know some sucker is going to make it happen. 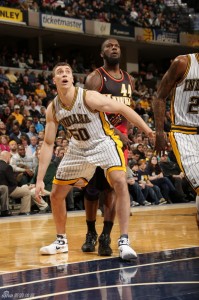 Surprisingly, suddenly-not-so-psycho-anymore T lived to tell about this.

Ironically, the outspoken Gerald Wallace was the primary catalyst in the latest example of “typical Nets basketball.”  Wallace was absolutely horrendous down the stretch as the Nets, who led 83-82 with 2:32 to go, fell to the Lakers 92-83.  Despite being left virtually unguarded, he was unable to make important shots from the perimeter, and his attempts to drive the ball to the basket were equally unsuccessful.  During the most troubling sequence of his 3-10 outing, Wallace missed consecutive shots and threw the ball away to blow Brooklyn’s last three offensive opportunities.  Additionally, Kobe Bryant had his way with Crash at the other end of the floor, twice toasting him for point-blank scores.  The Nets’ honeymoon with PJ Carlesimo appears to be over as the team is now 2-4 in their last six.

The big news from this game is a potential injury to the foot of Pau Gasol.  The immobilized Gasol has already been struggling with a variety of leg, foot, and emotional issues, so this could be yet another setback for the troubled Lakers.  According to the LA Times, Pau heard a “pop.”  What’s amazing to me that he can hear anything over the sound of his own whining.

The Houston Rockets tied an NBA record as they knocked down 23 threes and trounced the Warriors 140-109.  Golden State, meanwhile, went just 3-15 from beyond the arc.  Draymond Green, mad ’cause he was being styled on, was ejected from the game after swiping Patrick Beverly across the throat as the Rockets’ rookie attempted to shoot for the record with about 30 seconds to go in the game.  You can’t really blame Beverly as he had previously driven to the rack for a monster dunk only to be booed by his own home crowd.  As for Green, I find it funny that he made the Warriors’ most aggressive closeout of the night to prevent the Rockets twenty-fourth three.  Maybe try getting pissed when it actually matters next time.

Seven turnovers were committed in the last three minutes of Phoenix’s 96-90 road win in Memphis.  Seven.  If a team were to turn the ball over 3.5 times per quarter they’d average 14 a game, which is almost precisely where the Suns stand on the season (14.3).  Now, if a team were to turn the ball over 3.5 times per three minutes, they’d average FIFTY-SIX turnovers per game.  To put that in perspective, the Houston Rockets are last in the league in TOs at 16.4 a night.  Needless to say, the end of this game was incredibly ugly — like a college game, methinks — but it was abominable to the point where it was actually quite funny (unlike a college game).  Even the possessions that didn’t end in turnovers produced such hilarity as Darrell Arthur launching a three and Goran Dragic driving to the basket and attempting a shot from behind the backboard.  To Dragic’s credit, he was really the only player on the floor who was worth two cents during the stretch run; he scored 15 of his 17 in the fourth and each of the Suns’ last six, including the dagger on a pullup from 18 feet.  Whether it was Mike Conley, Jerryd Bayless, or Tony Allen, no Grizzly was able to hang with The Dragon.  Aside from the one where he ended up falling out of bounds and attempting to shoot the ball over the glass, Dragic had some impressive takes to the basket.  He also fooled the Grizzlies with the same damn move he used to beat them on December 12th.  Bears — not the smartest animals, apparently.

Jerryd Bayless dropped a season-high 29, and in doing so scored 20+ for the third time in four games.  He was totally useless down the stretch, but overall he’s been pretty good since the Grizzlies dealt their bench to Cleveland.  Tony Wroten, meanwhile, has been stapled to the pine.  Where’s your sense of adventure, Lionel Hollins?