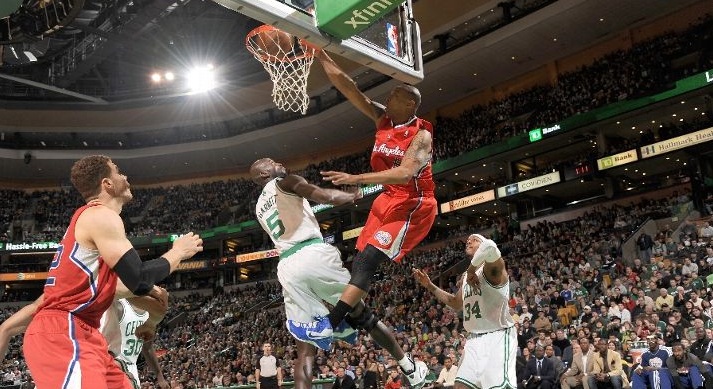 At age 32 and having suffered a serious knee injury, Caron Butler is a little bit past his dunking prime.  Don’t get me wrong, he can still throw down — typically with the right hand, as demonstrated here — but he isn’t quite as explosive as he once was.  That said, he was pretty freaking explosive during his tenures with the Heat, Lakers, and Wizards, so even at this regressed stage he’s able to surprise you from time to time.

The same can be said for 36-year-old Kevin Garnett.  Though not exactly the same caliber athlete as he was when the Timberwolves plucked him out of high school nearly two decades ago, he remains one of the league’s premier defensive forces.  To dunk on KG, it’ll always be something to write home about.  So, although this particular poster isn’t what it may have been had it occurred in 2004, it was still pretty exciting.

Tuff Juice — not KG’s favorite beverage.  Honorable mention to Brandon Knight, but Pau Gasol was just too sloth-y to make it a real poster.