JR Smith Goes All JR Smith On The Kings

Posted on February 3, 2013 by Stephen Coston 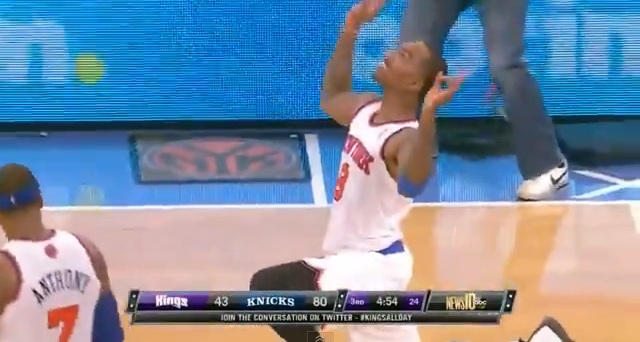 Twenty-five-point games aren’t really anything unusual from JR Smith.  He’s had seven of them this season and probably a hundred in his career.  Plus the Knicks played the Kings on Saturday.  If you don’t drop 25 on the Kings then you basically aren’t an offensive player of any consequence.

So, why exactly am I presenting you with the news that JR Smith scored 25 points against the Kings?  Well, that’d be because JR Smith’s 25 points against the Kings were extremely… JR Smith — especially the 15 that he racked up in the third quarter.  This isn’t making any sense to you?  Allow me to put it this way: if JR Smith was an adjective, what he did in this third quarter would be the definition.  Well, actually, some sort of reference to his Chinese escapades would be the primary definition, but this third quarter would be the second or third entry, for sure.

Also, 15 is a very JR Smith number, as is any number that happens to be divisible by three.  JR’s preferred method of scoring the ball is in three-point increments, so any time he records a sizable point total which is an even multiple of three it’s a pretty solid indication that he was feeling it.  In this particular instance, he was feeling it enough to take eight shots from 24 feet or deeper in a span of seven minutes.  His single longest/most JR Smith shot, by the way, was charted at precisely 32 feet.  That was the non-buzzer-beating heat check from the “S” in the Knicks logo at midcourt.  Unfortunately, it didn’t go and therefore isn’t shown in the video below.  You can, however, enjoy the five threes he did manage to make, and the accompanying swaggabrations (JR Smith doesn’t celebrate, he swaggabrates), of course.

Skip to 2:35 if you can’t be bothered with the filler.

Having watched this all unfold live on League Pass, I’m not exactly sure which was more awesome and hilarious: the 32-foot heat check or the possession where he took three threes in ten seconds.  Even my dad, a pretty serious guy, got a huge kick out of this.  Basically, we were both screaming at the rest of the Knicks to pass JR the ball, and then at JR to shoot it from wherever he was standing when he caught it.  Both parties pretty much obliged, and we laughed our asses off.  Unfortunately, Mike Woodson decided to cut the party short at the end of the third quarter.  Had he not, I’m pretty confident that Kobe Bryant and Donyell Marshall would’ve seen a record of theirs removed from the books.  As you can see, JR was having one of those nights where he’d shot so relatively well (9-16 overall, 7-14 from distance) that he wasn’t even going to let the ball cross the three-point line first.

And yes, this is why some people were actually willing to pretend that JR Smith deserves to play in the All-Star Game.  Can’t say that I blame them.