Dikembe Mutombo Returns To Your Television In A Hilarious GEICO Commercial

Posted on February 2, 2013 by Stephen Coston 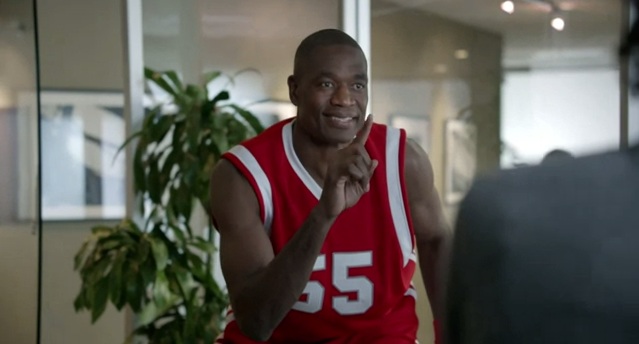 As much as we’ll always love the NBA for the high level of basketball that is played in it, there are some characters whose personalities are so grand that they endear themselves to us in ways that transcend the enjoyment we experience in watching them partake in the sport.  Without them, unfortunately, the league will never be quite the same.  One such character is Dikembe Mutombo, who you simply can’t help but love for his great enthusiasm, laudable philanthropic efforts, and cookie monster voice.  One of the saddest moments I’ve ever witnessed on a basketball court occurred in April of 2009, when Mutombo’s 18-year career was ended by an injury to his left knee.  That was the only time I’ve ever watched an athlete fall to the floor and known immediately that he’d never play again.

Though this was in fact the case, Dikembe hasn’t disappeared completely.  In the NBA, his presence lives on in his signature finger wag gesture, which is performed quite frequently by those who block shots with the same emphasis that he did.  In popular culture, Mutombo has popped up in advertising campaigns for products such as Old Spice, and now GEICO.  Behold, by far the funniest thing you might see during the next break in your television program:

Well, that’s certainly a welcomed break from “gameday bucket go boom,” and “six callers ahead of us Jimmy!”

Especially the part where he swats the kid’s cereal box.  I nearly hyperventilated after it exploded in midair.  Keep up the good work, GEICO.